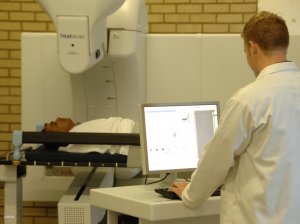 South African medical engineering group Lodox Systems will, later this year, release the fourth version of its digital X-ray screening technology, dubbed the Xmplar-dr, which the company says is “unrivalled” as the world’s only high-speed full-body digital scanning device.

Originally developed in the 1990s as a security device to prevent the theft of diamonds by workers at mining giant De Beers’ operations, the scanner was later adapted for use in medical trauma management to provide an almost instant diagnostic image of a patient’s injuries.

Earlier versions of the scanner, which is fully locally designed and manufactured, are currently in operation at over 40 healthcare institutions worldwide, including at the Chris Hani Baragwanath hospital, in Soweto, and Inselspital Bern, in Switzerland.

Lodox CEO Pieter de Beer explained that the exceptional feature of the Xmplar-dr is that it takes only 13 seconds to produce an accurate full-body overview of injuries and foreign bodies in a patient, as opposed to a conventional X-ray machine, which requires several minutes and various individual X-rays to compile a full-body image.

In addition, the device emits a radiation dose of 0.12 milligray – up to ten times less radiation than a conventional X-ray system.

“No other device can provide clinicians with such a fast and accurate picture of a patient’s entire body, in combination with such a low radiation dose, which means that the device can be used directly in emergency rooms, without the need for a separate X-ray unit,” he told Engineering News Online on Monday.

He added that in forensic pathology environments, the Lodox technology provides a user-friendly, high-speed method of assessing a subject’s entire body, in multiple planes, to assist with pathology location, and is particularly useful in determining the location of bullets in gunshot victims.

This eliminates the need to move the subject to obtain the required view from several angles.

“In trauma settings, the scanner also permits easy access to the patient to allow monitoring and resuscitation to take place in conjunction with the scanning process, which is impossible with a conventional X-ray process,” said De Beer.

While the group’s primary healthcare markets were the medical trauma, medico-legal and medico-forensic sectors, applications for the scanner beyond these disciplines were being investigated, including its use in paediatric and bariatric medicine.

“As a subsidiary of development financier, the Industrial Development Corporation, which is our 95% shareholder, we want to keep the machine as cost effective as possible so that it is accessible for the South African public healthcare sector. As such, the local selling price to public hospitals is around R4-million, while the cost increases to up to R5-million for the international market,” he commented.

Currently producing around 24 scanners a year, the group said it aimed to have a scanner in all local tertiary hospitals, as well as most district hospitals, in the next two to three years.

“We expect to sell between 14 and 16 machines in the next year and to align current production capacity with demand in the year thereafter,” said De Beer.