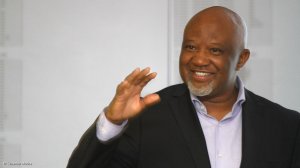 The newly proposed national minimum wage of R3 500 will not only establish greater labour stability in South Africa, but it will also evoke positive collaboration between business, labour and government, Deputy Finance Minister Mcebisi Jonas said on Monday.

Speaking on the sidelines of a media event in Secunda, Jonas noted that the conversation around the minimum wage was “never an easy discussion” and taking the quantum into consideration made the issue even more complex.

The minimum wage proposal, which was presented by a panel of advisers to the National Economic Development and Labour Council over the weekend, was welcomed by government but received a hostile reception from labour unions, who have deemed it too low.

“If you peg it too high, you will [once again] exclude [people from the economy]; too low, and it will have its own negative consequences. How do you find that balance that is acceptable to everybody?” asked Jonas, adding that government would ask for further engagements.

He noted that labour stability also played a significant role in the country’s possible downgrade by certain credit ratings agency, which could take place before year-end, highlighting that the country had not experienced major labour strikes in the last 18 months.

Jonas said he remained optimistic that South Africa would not be downgraded, adding that there were a range of factors that the ratings agencies would look at before taking such a step, such as whether government was sticking to its fiscal targets, and how its plans were being implemented.

“We have strengths as a country. Our judiciary is fairly strong, we have deep capital markets, and our gross domestic product spending on infrastructure is very good; in fact, it exceeds [that of] our peers,” he said, adding that the environment for doing business in South Africa was still “generally very good”.

Jonas noted, however, that if South Africa were downgraded, it would be detrimental to the country’s economic growth prospects, noting that it would not only curb investments – and therefore affect government and the private sector – but it would also impact on the greater public.