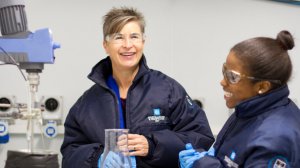 The University of Cape Town (UCT) has appointed Department of Chemical Engineering head Professor Alison Lewis as dean of the Faculty of Engineering and the Built Environment  – the first woman to be appointed to such a position.

Lewis had headed the Department of Chemical Engineering since 2013, after having moved up through the department’s ranks since July 1996, when she was appointed a senior lecturer.

Prior to this, Lewis was a postdoctoral fellow in the Water Research Group in UCT’s Civil Engineering Department and had also founded the Crystallisation and Precipitation Research Unit.

According to the university, Lewis had raised R52-million in funding for the unit since 2001, supervised 37 Masters and PhD students to graduation, published more than 120 international journal and conference papers and had established an international research reputation.

Vice-Chancellor Dr Max Price said Lewis, who would take up the position on June 1, had facilitated projects such as the new curriculum project and the assistant lecturer programme, which enabled postgraduate students to develop teaching skills that would make them potentially employable in academic positions once they had completed their studies.

She had also championed transformation initiatives by establishing four new academic posts in the department, three of which had been filled by black South Africans.