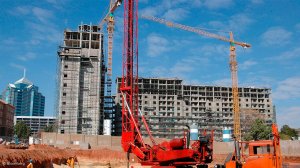 Photo by Bloomberg
HEIGHTENED BARRIER A survivalist vision and undercapitalisation of smaller contractors impact on the imports of new capital equipment
Photo by Bloomberg
CONTENTIOUS FACTOR Construction companies, face a choice between the demand to create labour, and to buy equipment

“This mind-set impacts on the imports of new capital equipment,” she tells Engineering News, highlighting that, while there is an increasing number of emerging smaller black economic- empowerment companies in the construction industry, these companies are “growing up on a shoestring budget”.

The subsequent undercapitalisation and lack of working capital of these companies exacerbate the barriers to importing new equipment, suggests Rhomberg.

She says companies tend to undercapitalise on their equipment, as they might not consider the long-term future but, rather, a short-term survivalist mode. “As a result, there is a tendency for smaller companies to buy second-hand – or even up to fifth-hand – pieces of equipment,” she explains.

Rhomberg believes smaller companies’ lack of investment in capital equipment can also be attributed to the size of their awarded contracts, particularly the smaller contracts, instead of the larger and longer order books of more established construction companies.

Meanwhile, the second edition of global assurance, tax and advisory services group PwC’s ‘Highlighting trends in the South African construction industry November 2014’ report notes that capex by public-sector institutions increased by 4.8% in the 2013 calendar year, with total expenditure for the year amounting to R212-billion. However, the report notes that the scale of this increase may be misleading.

“New construction work contracted by 2.2% to R133-billion, while plant, machinery and equipment purchased increased by 28% to R48-billion,” the report states. This indicates that there was a decline in the amount of capex on new construction works.

Latest Market Rhomberg suggests that smaller companies hire capital equipment, or machinery, to run less risk on costs and maintenance. “The hiring or rental market is increasing significantly, as smaller construction companies lack the balance sheets for capex,” she says.

While this trend stimulates the rental market, Rhomberg believes that rental companies buy “cheap and cheerful”, instead of acquiring a more expensive machine – a move that has been noted by several capital equipment suppliers.

Rhomberg adds that there remains continuing demand from importers for international export credit. She explains that export credits comprise government financial support, direct financing, guarantees, as well as insurance or interest rate support. These are provided for foreign buyers to assist them in financing the buying of goods from national exporters.

“Our interest rate remains high and the State has little available funding. Therefore, companies rely on export credit,” she emphasises.

Export credit finance enables companies to pay a small amount of cash, such as 15% upfront for the product, while the rest is paid off in instalments at a State-subsidised interest rate.

Nevertheless, Rhomberg notes that it is possible for the construction sector and importers to increase market share by investing in localisation, or in local manufacturing plants, as South African companies manufacture front-end loader buckets or excavator buckets for construction machines.

In addition, Rhomberg acknowledges that construction companies still face significant pressure to favour labour creation when considering acquiring capital equipment. “As South Africa has about 30-million unemployed citizens, there is strong focus on labour and job creation. In light of this, companies might not buy equipment that eliminates the possibility of creating multiple jobs,” she explains.

Acquisition Demand While government intends to spend R847- billion on infrastructure over the next three years, with the major State-owned enterprises, including Eskom, Transnet and the South African National Roads Agency, projected to spend R381.8-billion, – according to the Medium-Term Expenditure Framework (MTEF) – Rhomberg doubts that there will be enough future funding to support significant construction projects in South Africa.

“The opportunity for local manufacturing may also be affected by a lack of construction or infrastructure projects in future, owing to South Africa’s current indebtedness when it comes to major projects currently under way,” she concludes.