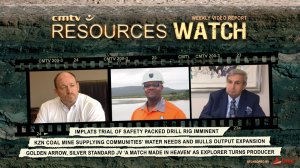 Welcome to Creamer Media’s Resources Watch, a weekly video round-up of the events and people making and shaping the news in the mining industry.

The Zululand region of KwaZulu-Natal was afflicted by what the Department of Water and Sanitation described as the “worst drought in a century” in 2016 and is still one of the water-scarce areas of the country.
ZAC engineering manager Siyabonga Mathonsi:

Canadian explorer Golden Arrow Resources has made the leap from project developer to revenue-earning miner through its novel partnership with senior miner Silver Standard Resources, after the latter exercised its option to form a JV with the company that will leverage significant synergies between the miners’ respective assets.
Golden Arrow president and CEO Joseph Grosso:

For mining news as it breaks, stay logged onto Mining Weekly.com and register for our free daily newsletter.