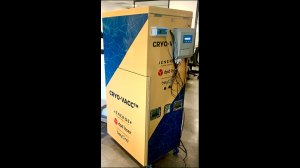 The Cryo-Vacc has been designed to keep Covid-19 vaccines ultra-cold during transportation for up to 30 days, allowing for the vaccines to be transported over longer distances and to reach remote areas.

The Cryo-Vacc has a temperature range of -150 ºC to 8 ºC, making it highly versatile for a range of vaccines, says Renergen.

The solution is intended to simplify the logistics of moving vaccines at extremely cold temperatures of between -70 °C and 8 °C for more than four weeks, and without the need for any power supply.

Combined with best-in-class cold chain monitoring and asset tracking technology from Internet of Things (IoT) solutions provider Beyond Wireless, a World Health Organisation Performance, Quality and Safety (PQS) certified remote temperature monitoring solution provider, the Cryo-Vacc can provide accurate temperature readings of the vaccines while in transit, as well as global positioning system tracking to ensure the chain of custody can be audited.

The Cryo-Vacc is suitable for both air and ground transportation, as it uses liquid nitrogen to transport by road and helium to transport by air, Renergen CEO Stefano Marani explained during the unveiling.

Aside from helium being only a “fraction of the weight” of nitrogen, thereby significantly reducing its cost in airfreight, when used in Cryo-Vacc, helium can accommodate up to 12 times more vials per flight than other cryogens based on current flight safety regulations.

With the recent release of the National Department of Health tender for the distribution of vaccines in South Africa, Renergen has teamed up with local express courier partner DPD Laser, which is part of The Laser Group and known for its last mile courier express capabilities and infrastructure throughout South Africa.

The device is made of aluminium, providing durability and a long lifespan for end-users. A reservoir has been built into the device, which is filled with liquid helium, the coldest liquid available globally.

This liquid is then boiled and released over a 30-day period to maintain the temperature at a constant level. Liquid helium is also 20% of the density of liquid nitrogen, making the device light to carry, with an overall weight of less than 20 kg.

Further, validation of the Cryo-Vacc in anticipated deployment situations will start shortly, but Renergen has already begun discussions for the sale of units to logistics companies outside of the South African Development Community.

“Precise temperature control combined with a formidable hold time in transit, makes Cryo-Vacc a compelling asset in the transport of biologics, especially in the developing world. With a useful temperature range of over 150 ºC, Cryo-Vacc is very versatile when compared to even standard refrigeration technology,” Marani elaborated, adding that the company is hopeful the solution “helps save many lives and restore some normality as the world builds herd immunity”.