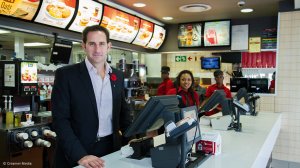 McDonald’s South Africa CEO Greg Solomon says the company wants to use a “go-to-market” concept with regard to the construction of its future restaurants, producing scalable, adaptable buildings, “like a Meccano set”, adding modules as needed.

“This is a huge trend for us,” he noted when hosting an ‘open door’ on Thursday to showcase the fast food outlet’s first light steel frame (LSF) building in Gauteng, in Silver Lakes, Pretoria.

“You have to be locally relevant from a consumer perspective but also from a building perspective,” Solomon highlighted, pointing out that, when designing, the company tailored a restaurant to the consumers specific to its location.

He advised that McDonald’s South Africa would like the go-to-market concept to be applied to 30% to 40% of its portfolio in future, and whether this would continue to involve the LSF building methodology going forward was yet to be seen.

“If you look at innovation, LSF is just one stepping stone on this journey … tomorrow [we] could [use] something new.

“We will continue to improve, evolve and pioneer. This decision stems from our philosophy to support sustainable building methods as far as design, energy efficiency and the optimal use of natural light are concerned,” he commented, pointing out McDonald’s South Africa was also focused on renewing, refreshing and modernising its current fleet.

Costing under R5-million, the double storey Silver Lakes restaurant on the corner of Bendeman Boulevard and Solomon Mahlangu Drive, took 100 days to erect.

“[Using LSF] McDonald’s was able to cut back on the construction period required, opening restaurants four months earlier than if more traditional building methods [such as brick and mortar] had been used,” Solomon said, adding that within four weeks the erection of the superframe is complete using a 250 mm raft slab.

Built 18 months ago, he has noticed that the South African consumer prefers dining downstairs. “Upstairs is working for us but I am a bit disappointed.”

McDonald’s South Africa opted for LSF for its new outlets as the methodology aligned with its energy efficient building objectives.

“Through these buildings, significant savings targets are realised – 20% savings on water consumption, electricity, costs and construction time. One of the main advantages [is that] restaurants cool down and warm up faster than conventional buildings, increasing the comfort levels of customers.”

McDonald’s South Africa first used the LSF building methodology when it constructed its restaurant in Goodwood, Cape Town, on June 9, 2013, which was “the first LSF informal ‘eating-out’ restaurant of this kind in South Africa,” Solomon explained.

McDonald’s South Africa won the Light Steel Framing award for a combined entry of its seven LSF restaurants at the 2014 Steel Awards.

“It is our responsibility to lead in this way as a big corporate and we understand the importance of sustainable business practices to minimise our impact on the environment.”