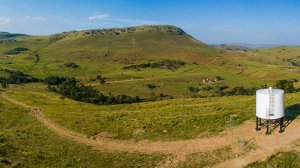 The Southern Africa Stainless Steel Development Association (Sassda) was awarded the Bronze Award by the International Stainless Steel Forum (ISSF) in the category of Best New Applications Featuring New Technology, for the development of municipal water storage tanks that were made from 3 chrome (CR)12 stainless steel to replace concrete.

Continuing its well-established practice of awarding excellence for projects involving new applications for stainless steel, the ISSF presented awards in May in two categories: Best New Application Featuring New Technology and Best New Application Featuring New Market Development. The winning entries were selected from submissions from members or their customers and, in an effort to encourage more participation, the ISSF board agreed to name three winners in each category.

Finnish stainless steel producer Outokumpu was awarded gold for Best New Application Featuring New Technology for the development of bionic lightweight structures for battery vehicles, while Japanese manufacturer Nippon Yakin Kogyo received the silver award in the same category for diffusion bonded compact heat exchangers made from modified 316L grade stainless steel. Sassda received the bronze award on behalf of one of its members – steel fabricator Skyhill Heavy Engineering, part of theHydra Arc Group, based in Secunda, Mpumalanga – which specified the use of 3CR12 for municipal water storage tanks in rural areas with an innovative design, featuring an inverted bottom cone that allows drainage of sludge and cleaning without emptying the tanks.

Meanwhile, European stainless steel producer Aperam was awarded the gold award for Best New Application Featuring New Market Developments for the enclosure of the remains of the troubled Chernobyl Nuclear Reactor, in the Ukraine, which has been covered in a domed sheath of stainless steel. “This is an outstanding example of how new applications for stainless steel can simultaneously benefit the environment and imaginatively catch the attention of the public, and mark stainless steel as being something that does good things. That is vitally important for our public image,” says the ISSF.

Owing to the very high standard of the submissions, the silver award was bestowed on two joint winners. Multinational steel manufacturer ArcelorMittal was recognised for the duplex material Tidal Sluice Gates at Mont Saint Michel, in France. “This is also a very public construction, as it is situated at a very prominent tourist destination in France.”

The second silver award went to Japanese steel producer Nippon Steel and Sumikin Stainless Steel Corporation for the alloy-saving duplex stainless steels that were produced for dam flood gates. “This is yet again a very useful public service contract, where its extended service life will save significant public funds.”

The bronze award was won by Spanish stainless steel producer Acerinox for a walkway suspension bridge that was completed in an underground railway station.

Safety in Steel Alongside the awards for technical excellence, the ISSF also recognised companies that had shown an outstanding commitment to safety consciousness in their operations through its Safety Awards. These awards reiterate the importance of safety, while also promoting advancement in the industry through the creation of a knowledge-sharing forum. The ISSF runs its Safety Awards Programme annually, inviting its members to submit ideas from their own safety programmes. These ideas are circulated among other members and the winning ideas have the benefit of achieving peer recognition, as well as a certificate which can be used in their own publications.

Everyone who submits an entry is recognised by having their entry included in the ISSF Annual Safety Awards Report, which is circulated to all members and published on the ISSF extranet. “The standard of entries remains very high. Having decided to introduce second and third placed winners to increase the incentive to submit entries for these awards, we awarded two joint winners in both second and third places, because the entry quality was so high.”

Spanish company Acerinox Europe SAU was selected for first place recognition for an innovative design for a new lifting device for the tundish, to avoid the risk of injuries to hands and fingers as well as the head or body. In joint second place were South African stainless steel producer Columbus Stainless and Belgian company Aperam Genk, with both companies focusing on reducing accidents and damage to material and improving controls and safety in their transport fleets. Third place was shared by Japanese supplier JFE Steel and South Korean steel producer Posco, who have both made innovative use of films and DVDs for safety training.