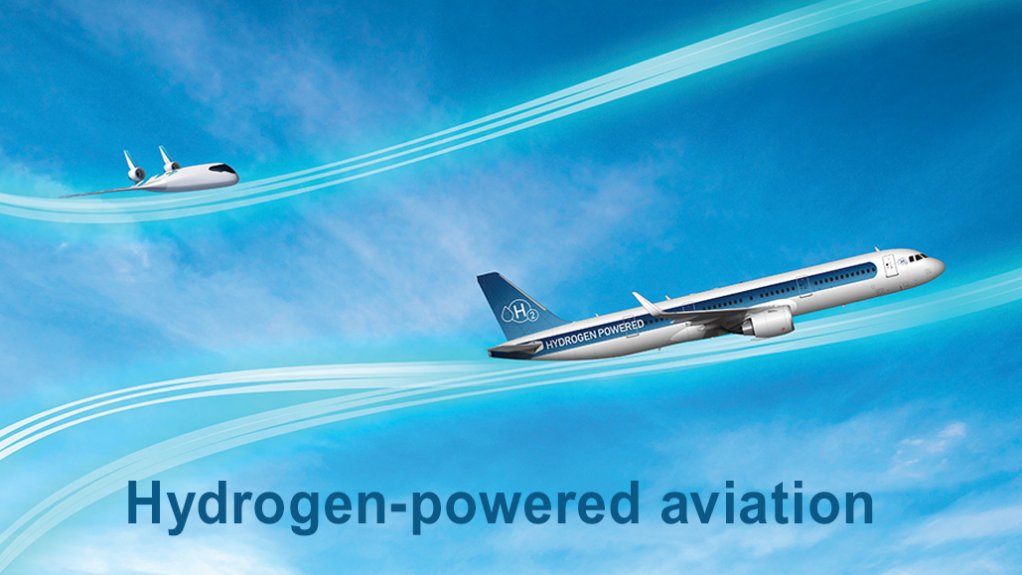 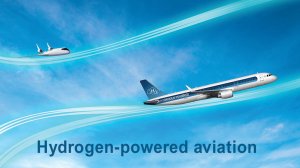 Strong steps are being taken to keep the skies clean using hydrogen to power aircraft.

JOHANNESBURG (miningweekly.com) – Hydrogen as an energy source will play a key role in transforming aviation into a zero-carbon/climate-neutral system over the next few decades, an independent study states, which also estimates that the first short-range hydrogen-powered demonstrator could be developed by 2028 if sufficient investments into research and innovation (R&I) are made.

Commissioned by Clean Sky2, Fuel Cells and Hydrogen2 Joint Undertakings to assess hydrogen’s potential for use in aviation, the study calculates that novel and disruptive aircraft, aero-engine and systems innovations, in combination with hydrogen technologies, can help to reduce the global warming effect of flying by 50% to 90%.

The study finds that hydrogen can be a primary energy source for propulsion, either for fuel cells, direct burn in thermal gas turbine engines or as a building block for synthetic liquid fuels at an extra cost of less than €18 or $20 per person on a short-range flight.

Such disruptive innovation, the study says, will require significant aircraft research and development, further development of fuel cell technology and liquid hydrogen tanks, as well as investment in fleet and hydrogen infrastructure, and the accompanying regulations and certification standards to ensure that safe, reliable and economic hydrogen-powered aircraft can take to the skies.

The technical challenges and unique characteristics of hydrogen as an on-board energy source make it best suited to commuter, regional, short-range and medium-range aircraft.

For the next decades, long-haul air travel is likely to be based on liquid hydrocarbon fuels, but these fuels will also need to be sustainable and these ‘drop-in’ fuels will also rely on hydrogen for their production, the study states.

These innovations can help to meet the drastic reduction targets for aviation emissions set out in the European Union (EU) Green Deal.

This and a multiplicity of global decarbonisation announcements have all the elements of driving increased demand for South Africa’s treasure chest of metals, including platinum-group metals, vanadium, manganese and nickel. Platinum plays a fundamental role as a catalyst in proton exchange membrane (PEM) fuel cell technology that turns hydrogen into electricity cleanly and also in PEM electrolysers that turn sea water into hydrogen. Long-duration energy storage systems require vanadium, which South Africa is best placed to provide.

Also, South Africa’s superior sunshine, prime wind, abundance of land, and widespread oil and gas infrastructure that can be used for hydrogen, as well as port space at Coega, in the Eastern Cape, have all the hallmarks of enabling South Africa to produce green hydrogen for export competitively.

Japan’s required price level of ¥30/m3 of hydrogen translates into about $3/kg, which can be achieved by South Africa, with Europe  also growing as a potential market.

The Deutsche Gesellschaft für Internationale Zusammenarbeit GmbH, or GIZ, is planning a project involving South Africa, Morocco and Argentina on the possibility of developing renewable-energy-generated decarbonised fuel – Power-to-X – for export to Europe, as well as for developing  a local economy.

The Port of Rotterdam, as an energy hub and gateway port for Europe, is aiming have its first hydrogen import terminals and corridors  ready for demand from 2023 to 2026 and beyond.

The keynote speakers at the online event at which the hydrogen aviation study was presented were European Transport Commissioner Adina-Ioana Vălean and European Commission Research and Innovation deputy director-general Patrick Child.

According to the report, these policy actions are needed:

"Hydrogen in aviation offers many opportunities for the transformation of our aviation sector. From production and distribution to new aircraft designs and large-scale use, it provides numerous opportunities for European companies to be at the forefront of our industrial revolution in the years to come," says Vălean.

“R&I is vital to realise the full potential of hydrogen technologies for decarbonisation of aviation. The EU’s future Horizon Europe R&I framework programme is a fantastic opportunity to advance this agenda, working in partnership with industry and the research community. The excellent cooperation between the existing Joint Undertakings dedicated to hydrogen fuel cells and clean aviation illustrates the need for close synergies between the two sectors as we work together on the ambitious objectives of the post-Covid recovery and the European Green Deal,” says Child.

“Our ultimate goal is to achieve climate-neutral aviation by 2050. Turning this ambition into a reality requires the seamless integration of a range of important new technological advancements, one of which is hydrogen-powered aircraft. This comes hand in hand with priorities such as hybrid engines, more electric aircraft, ultra-efficient short- and medium-range aircraft and lighter airframes. The mix of these various game-changing technologies will help us to reach our final destination,” says Clean Sky 2 Joint Undertaking executive director Axel Krein.

“The cost of producing clean hydrogen came down in recent years, owing to cheaper renewable electricity, and bigger and cheaper production technology.Simultaneously, fuel cell performance in terms of durability, capacity and cost has made big steps forward. This combination has now made it possible to look to such solutions for decarbonisation of the aviation industry and the results of the study are clear on the huge potential of hydrogen in aviation. The hydrogen and fuel cell sector is ready to work hand in hand with the aviation industry to design, test and produce the required components and make zero-emission aviation an everyday reality,” says Fuel Cells & Hydrogen 2 Joint Undertaking executive director Bart Biebuyck in the release to Mining Weekly.

Fuel Cells & Hydrogen 2 Joint Undertaking, which is a public–private partnership between the European Commission and Hydrogen Industry, contributes to the development of sustainable and globally competitive fuel cells and hydrogen technologies in Europe. By bringing together a wide range of industrial and scientific partners, it supports EU approaches on innovative hydrogen solutions for sustainable energy and transport applications, sectorial integration and energy storage, thus contributing to the EU climate change goals and strengthening the EU industrial competitiveness.

Clean Sky, part of the EU’s Horizon 2020 programme, develops innovative technologies for more aerodynamic wings, lighter and more efficient engines, smarter systems and new aircraft configurations, as well as a more sustainable aircraft life cycle. The purpose of the programme is to reduce carbon dioxide emissions and noise levels produced by aircraft. It brings together more than 900 partners from industry, small businesses, research centres and academia for the best innovative results, and is strengthening European aeronautics collaboration, global leadership and competitiveness.