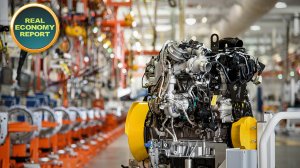 The Ford Struandale Engine Plant in Port Elizabeth assembles the new-generation 2.0 Bi-Turbo and 2.0 Single Turbo engines for selected Ranger and Everest models. The plant has “state-of-the-art” production processes and technology for the new-generation diesel engines, including fully automated robotic stations, as well as multiple camera and transponder systems for maximum quality.

As part of the tour, journalists from several media houses, including Engineering News were afforded a unique opportunity to be part of the production process.

The engine assembly and component machining for the 2.2 and 3.2 Duratorq TDCi is used in the Ranger and Everest, and exported to customer markets overseas.

The introduction of the new diesel engine programme followed an investment of R3-billion in Ford’s South African operations at the Struandale Engine Plant and the Silverton Assembly Plant in Pretoria, announced in 2017 where President Cyril Ramaphosa was present.

At the tour, guests were taken on a tour of the Southern African Foundation for the Conservation of Coastal Birds (SANCCOB) Port Elizabeth seabird rehabilitation centre, 20 km away.

SANCCOB is a marine conservation non-profit organisation established in 1968, with the aim of rescuing, rehabilitating, and releasing ill, injured, abandoned, and oiled seabirds.

It is internationally recognised for the role it played in the rescue of 40 000 African Penguins during the massive ‘MV Treasure’ oil spill in 2000, when the iron ore tanker sank between Robben Island and Dassen Island.

It is also recognised by the South African government as the leading oiled wildlife response organisation in the country’s National Oil Spill Contingency Plan.

Further, the Ford Castrol Cross Country Team is stepping up to the premier class in the Production Vehicle category of the South African Cross Country Series for 2020. The team, which is run by Neil Woolridge Motorsport, is set to debut a completely new FIA-class Ford Ranger during the season, powered by an advanced twin-turbocharged petrol engine – a ground-breaking, world-first for this category of motorsport.