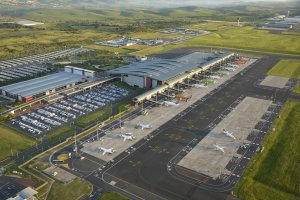 The Durban Aerotropolis, with King Shaka International Airport at its nucleus, will be launched this year with Dube TradePort as the implementing agent.

Dube TradePort CEO Hamish Erskine tells Engineering News that the implementation of the aerotropolis will involve establishing the funding strategy and providing feasibility support for the various projects planned within the development.

Erskine says the role of delivering the Durban Aerotropolis rests with various stakeholders from the KwaZulu-Natal departments of Transport and Economic Development, Tourism and Environmental Affairs, to the eThekwini and KwaDukuza municipalities, as well as airport management company Airports Company South Africa.

“We believe that the Durban Aerotropolis has the potential to be a catalyst for social, spatial and economic transformation in the region,” he proclaims.

Erskine confirms that construction developments around King Shaka International Airport are already attracting investment and expansion in the manufacturing and agriculture sectors.

Since the opening of the King Shaka International Airport in 2010, Erskine says the airport has attracted nine international airlines, which has contributed to a 155% growth in passenger numbers yearly and an additional 138% growth in cargo volumes.