By: Terence Creamer     Updated 3 hours ago The South African government is being urged to accelerate the implementation of its renewable-energy-heavy Integrated Resource Plan 2019 (IRP 2019) as part of the country’s post-Covid-19 economic recovery package. Meridian Economics MD Dr Grové Steyn, who is currently modelling the economic... → 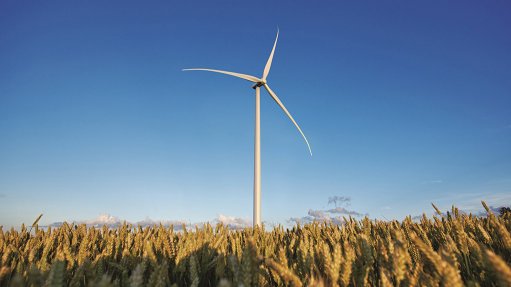 By: Marleny Arnoldi     Updated 5 hours ago Although South Africa has a resilient and robust agricultural system, Covid-19 has exposed some fault lines and vulnerabilities in certain value chains that need to be addressed, industry role-players say. Financial services provider Nedbank on June 4 hosted an agriculture webinar with experts... →

By: Tasneem Bulbulia     Updated 5 hours ago A year ago, the first PWR BLOK from the Swedish clean technology company Swedish Stirling was commissioned at ferrochrome producer Afarak's Mogale site, in South Africa. The company is now ready to launch on a larger commercial scale in the country. →

By: Marleny Arnoldi     Updated 5 hours ago JSE-listed industrial group Barloworld has advised that it has not reached consensus with fellow-listed Tongaat Hulett about an independent accountant that is supposed evaluate the terms of a sale and purchase agreement between the companies. Barloworld in May raised a concern about Tongaat’s... →

By: Tasneem Bulbulia     Updated 5 hours ago Thought leadership organisation, the Construction Management Foundation, has noted the announcement by the Presidency that it will host an inaugural Sustainable Infrastructure Development Symposium on June 23. This symposium will unveil an infrastructure project pipeline from six priority sectors. →

By: Tasneem Bulbulia     Updated 5 hours ago Fishing company Oceana Group delivered a resilient operating performance for the six months ended March 31. Group revenue was up 2% to R3.63-billion, primarily owing to a 3% increase in revenue by its African operations, an increase in cold storage occupancy levels and the favourable impact of... →

By: Donna Slater     Updated 5 hours ago With a letter of demand addressed to the Government Employees Pension Fund (GEPF) and the Public Investment Corporation (PIC), labour union Solidarity instituted legal steps to stop the exchange of Eskom debt for Eskom shares, on June 4. In doing so, Solidarity demands that plans by the PIC to... →

By: Donna Slater     Updated 5 hours ago A survey conducted by gig technology company M4Jam has found that half of all South African smokers have been able to source new cigarette supplies during lockdown, and 95% are paying elevated prices for what are mostly black-market products. M4Jam states that a demographically representative... →

By: Simone Liedtke     Updated 4 hours ago Lockdowns, in response to the Covid-19 pandemic, have been “a challenging balance” to maintain, says World Health Organisation (WHO) Africa regional director Dr Matshidiso Moeti. She notes, however, that while the economic impacts thereof have been severe, “an out of control spread of the... →

By: Rebecca Campbell     Updated 6 hours ago Airbus Defence and Space, part of the Europe-based global giant Airbus aerospace group, announced on June 3 that it had finally completed the full industrial development of the paratroop deployment capability of its A400M military airlifter. The final step, successfully concluded last month, was... →

By: Simone Liedtke     Updated 5 hours ago The World Steel Association (worldsteel) expects global steel demand to contract by 6.4% this year, as a result of the Covid-19 crisis. In its Short Range Outlook (SRO) for 2020 and 2021, released on June 4, the industry body states that steel demand is, however, expected to increase by 3.8%... →

By: Rebecca Campbell     Updated 5 hours ago UK-based industrial technology group Rolls-Royce has been awarded a four-year full-service engineering design framework contract by the UK Atomic Energy Authority (UKAEA). The contract means that Rolls-Royce will help deliver multi-disciplinary projects for the UKAEA. The company will provide... →

By: Martin Creamer     Updated 5 hours ago Depressed platinum is being nudged into a sweeter spot by a combination of the Covid-19 pandemic, new focus on diesel vehicles, trickling substitution of platinum for palladium and worsening supply constraints, Mining Weekly can today report. Covid-19 funding demands are delaying the planned... →

By: Martin Creamer     Updated 5 hours ago The Standard Bank is well positioned to weather the Covid-19 storm and remains determined to emerge from this crisis as a stronger Africa-focused financial services group, Standard Bank Group FD Dr Arno Daehnke said on Thursday. The capital and liquidity levels Africa’s biggest lender by assets... →