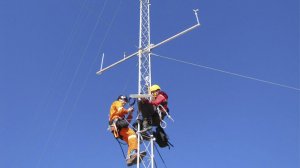 With the prospect of wind energy as a viable source of renewable energy in South Africa increasingly on the rise, the South African National Energy Development Institute (SANEDI) tells Engineering News that areas have been identified in South Africa with significant wind sources through a wind atlas project.

“The country’s greatest wind sources are located along the coastal areas. However, there are also vast inland areas that have been scientifically confirmed with good wind sources. These areas have been identified through the Wind Atlas for South Africa (Wasa) project,” says SANEDI wind energy expert and project manager Andre Otto.

The Wasa project falls within the South African Wind Energy Programme (SAWEP) which is a multiyear, technical-assistance project. Phase 1, which took place from 2007 to 2010, supported the establishment of the Darling Wind Farm, which was South Africa’s first independent wind power producer.

Phase 2, currently taking place, from 2015 to 2019, has four main focus areas and is a project that is funded by the Global Environment Facility and project managed by SANEDI on behalf of the Department of Mineral Resources and Energy (DMRE). These focus areas are the monitoring and evaluation of the implementation of local-content requirements; resource mapping and wind corridor development support for policymakers; support for the development of the small-scale wind sector; and training and human capital development for the wind energy sector.

The Wasa project is being implemented by SANEDI on behalf of the DMRE and within the resource mapping and wind corridor development support focus area. With the validation of 18 wind measurement masts covering 75% of land, a wind resource map depicts the local surface-wind climate, such as the mean wind speed and power density in which a wind turbine or wind farm would operate.

“This project also provides statistics that provide predictions for the yearly energy production of a wind turbine and the expected capacity factor. This means that it can be used to estimate the bankability of a wind project and save time and money.”

However, Otto says that not all wind areas can be developed for energy generation, “although it is theoretically possible for these wind sources to generate enough energy to sustain the entire country’s power supply, this might not be practically viable”.

He explains that wind, much like solar energy, is a variable energy resource and is most effectively used with energy storage systems, or in combination with other energy sources. This tandem use can ensure and sustain a secure electricity supply on a large scale.

“For example, in Denmark, 41% of the energy demand is supplied by wind energy. When there is an excess of wind power, Denmark exports electricity to neighbouring countries. Similarly, when wind speed is too low, hydropower is imported from Norway and other surrounding countries to ensure the reliable operation of the Danish power grid.”