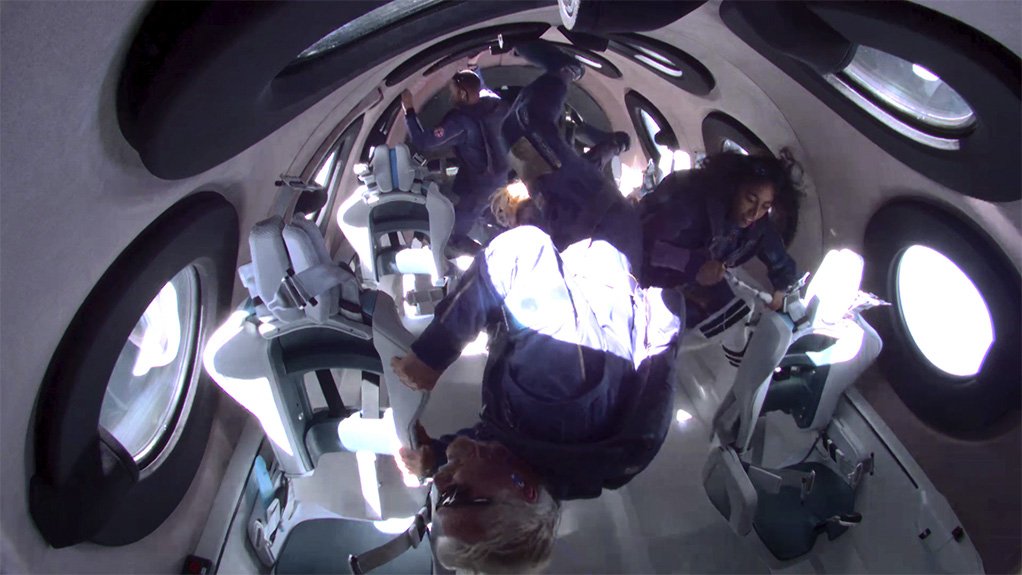 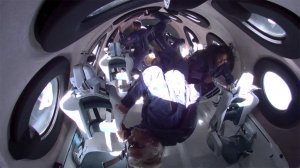 The interior of VSS Unity’s cabin after it had achieved zero gravity conditions in space, with Sir Richard Branson and Sirisha Bandla

The VMS Eve/VSS Unity combination took off from Spaceport America in the US state of New Mexico. Following its release from the VMS Eve, VSS Unity ignited its rocket motor and soared upwards, reaching a speed of Mach 3 (Mach 1 is the speed of sound). It reached an altitude of 53.5 miles (almost 86.1 km). During the flight, the crew fulfilled a range of test objectives which included evaluating the commercial customer cabin, the cabin and customer experience and the views of Earth from the spaceplane when it is in space. They also evaluated the effectiveness of the five-day preflight training programme for passengers and the conditions for carrying out research on the VSS Unity. The spaceplane then re-entered the atmosphere and glided back to the spaceport.

The boundary of space is actually a rather arbitrary affair, but all US authorities, aviation and space, civil and military, accept 50 miles (about 80 km) up as the point where space begins. Many other countries and international agencies prefer the higher ‘Von Kármán Line’ (named after Hungarian engineer Theodore von Kármán and the altitude at which aerodynamic flight – using wings and conventional control surfaces – becomes impossible and spaceflight becomes the only option), which is often taken to be 100 km (62 miles) up. However, he never actually calculated the altitude at which point this transition happened, and when in the early 1960s pioneer US space lawyer Andrew Gallagher Haley actually used Von Kármán’s concepts to calculate (or have calculated for him) the altitude of the line, the result was 52 miles (or some 84 km). So, both by US official definition and in terms of the ‘true’ Von Kármán line, Branson and his colleagues entered space on Sunday.

“I have dreamt about this moment since I was a child, but nothing could have prepared me for the view of Earth from space,” enthused Branson after the flight. “We are at the vanguard of a new space age. As Virgin’s founder, I was honoured to test the incredible customer experience as part of this remarkable crew of mission specialists and now astronauts.”

“[Sunday was] a landmark achievement for the company and a historic moment for the new commercial space industry,” affirmed Virgin Galactic CEO Michael Colglazier. “With each successful mission we are paving the way for the next generation of astronauts. I want to thank our talented team, including our pilots and crew, whose dedication and commitment made [Sunday’s flight] possible. They are helping open the door for greater access to space – so it can be for the many and not just for the few.”