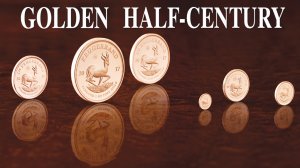 Special video report on the Krugerrand.

JOHANNESBURG (miningweekly.com) – The gold bullion Krugerrand represents a most remarkable story from a beneficiation perspective, with more than 60-million pieces sold over the past 50 years. This equates to more than 1 660 t of local gold used in the process, and about 25% of all South African gold sold currently is in the form of Krugerrands.

This is according to precious metal smelting and refining complex Rand Refinery CEO Praveen Baijnath, who spoke to Mining Weekly during a site visit to the company’s facility on the East Rand, in August, to mark the coin’s fiftieth anniversary.

He highlights that most of the gold used to produce the Krugerrand is mined in South Africa, where it is also locally alloyed, blanks are produced and other related services, including marketing and distribution, are undertaken.

The gold that is used to produce the Krugerrand is sourced, refined and then manufactured by Rand Refinery, where it produces blanks of the coin. About 9 000 blanks a day are then struck by the South African Mint – a subsidiary of the South African Reserve Bank (SARB) – and the coins are then returned to Rand Refinery for final packaging, following which they are marketed and sold worldwide.

Baijnath notes that, since the first 22 ct gold Krugerrand was manufactured on July 3, 1967, the gold bullion coin has become a sought-after item for “discerning investors”. This demand has made the Krugerrand the world’s most traded gold bullion coin of all time, beating out its closest competitors, the Canadian Maple Leaf and the US Eagle.

Increased demand for gold has supported sales of Krugerrands, with this year predicted to yield the highest sales since the 1980s on the back of an expected 15% to 20% increase on the 1.1-million ounces in coins sold in 2016.

This is according to Rand Refinery marketing executive head Richard Collocott, who also addressed the media during the visit.

He notes that the resurgence of demand for the Krugerrand returned the coin to its standing as the world’s best selling new gold coin last year. In 2016, the Krugerrand held a 26% market share of the global gold bullion coin market.

Collocott comments that the most important export segment for the Krugerrand is German-speaking Europe, Germany in a particular. “Germans like the Krugerrand. I think it may have to do with the fact that it was the first gold investment product marketed in Germany. The country was also the first to market and support sales of the coin,” he points out.

Some of the earliest marketing partners of the Krugerrand include German banking institutions Deutsche Bank and Bayerische Landesbank. These banks are still Rand Refinery’s largest partners worldwide, with Germany buying about 400 000 oz/y of Krugerrands.

The local versus international sales percentages vary from year to year; however, currently more than 50% of the coins are sold in South Africa.

“We have recently noticed a steady increase in local demand for Krugerrands,” he says, attributing this to gold is traditionally being viewed as a hedge against uncertainty, inflation, currency risk and general instabilities.

Collocott says it is a misperception to view Asia as a major market for coin sales. He notes that it is, however, a large gold market. “The form of gold that the Asian market prefers buying is typically not legal market coins,” he states.

The biggest coin markets worldwide are found in Europe and the US. In Europe, the Krugerrand has a leading market position, while Rand Refinery actively works with its distribution partners and market experts to expand the coin’s footprint in the North American market.

World Gold Council market and member relations head John Mulligan tells Mining Weekly that the aim when creating the Krugerrand was to increase gold’s accessibility to the everyday investor worldwide.

He says, while the introduction of highly liquid and cost-effective gold products, such as exchange-traded funds (ETFs), has increased competition in the market and has contributed to reducing premiums on physical gold bars and coins, the Krugerrand has been an exception to this trend in recent years.

“The slowdown in its production relative to other bullion coins has created limited supply and, coupled with its strong brand, this has translated into higher premiums. With momentum around the fiftieth anniversary and global investor interest in small bars and coins structurally higher since the financial crisis, we anticipate demand to continue to be relatively robust,” states Mulligan.

Moreover, he states that any discussion about the medium- to long-term prospects for the Krugerrand should recognise the very substantial global increase in investor interest in gold, particularly after the 2008 financial crisis.

Mulligan states that, for future gold coin sales, the rise of private investor interest is highly significant, with yearly demand for small gold bars and coins having more than doubled over the past 30 years.

He says, although investors seeking gold have a “far wider choice of options” than was the case during much of the Krugerrand’s heyday [of the late 1970s and early 1980s], the increase in overall demand for physical gold means that trusted and accessible products like the Krugerrand are likely to remain in demand.

The idea of creating a gold coin for South Africa was first initiated in 1934 by the Chamber of Mines (CoM) Gold Producers Committee (GPC) comprising the CEOs of gold companies. This committee was first established in 1889 and still exists today.

The CoM recounts that, in the early 1960s, its thinking shifted towards minting a 1 oz legal tender coin with the object of placing as many coins as possible into as many hands as possible. The opportunity to turn this thinking into action came with the decision to introduce a new standard coinage as part of the decimalisation process in 1961.

It was at this time that the GPC approached the then Finance Minister Theophilus Ebenhaezer Dönges to discuss the possibility of producing a South African coin that would serve as legal tender. The parties agreed that the value of the coin would be based on the value of 1 oz of pure gold at any given point in time and, in 1967, the first Krugerand was minted.

In 1969, the CoM set in motion the mass marketing of the coin, which was first launched in then West Germany through the Deutsche Bank.

In 1980, the fractional Krugerrands (a half ounce, a quarter ounce and one-tenth of an ounce) were added to the 1 oz Krugerrand coin range to enable investment in gold at more affordable prices.

Mulligan points out that the fact that the coin has established such a strong brand is also related to its first-mover advantage.

“Until 1979, the Krugerrand was the only ounce-denominated gold bullion coin – with its value explicitly reflecting its guaranteed gold content – available to the international market, providing an opportunity to own gold that was issued at a relatively low premium.

“This, along with the associated marketing of the coin as a trusted, secure investment asset, opened up gold more generally to a wider investment pool and contributed to creating greater appetite for gold coins more broadly within the investment market,” he states.

Collocott points out that, as a “world-class liquid asset”, the Krugerrand provides investors an opportunity to buy physical gold which is recognised as a hedge against market uncertainty, as well as economic and political risk.

He further notes that an investment in the Krugerrand is secure, as its face value is denominated in ounces of pure gold, while other gold bullion coins have a face value significantly below the value of gold. This means that the SARB guarantees the purchase of any Krugerrand tendered for the ruling gold price on the day, whereas with other coins, the issuing government only guarantees the face value.

Collocott mentions further that gold as a “safe haven investment” has become more attractive to investors in recent times, owing to low interest rates and global volatility, as a consequence of among other geopolitical uncertainties stemming from events like Brexit. “A hedge against inflation, a gold bullion Krugerrand bought in 1967 for $32 could return well over $1 200 today,” he notes.

Collocott says, in fact, because of its gold content, a Krugerrand could be readily liquidated into currency in most countries.

He highlights that one of the most unique aspects of bullion investment is its resilience against the devaluation of currency caused by inflation. He explains that historically, inflationary pressures led investors to procure gold and other precious metals. Collocott remarks that this was because, unlike currency, bullion investments do not lose their value as their “value is inherently stored” in the metal content.

The value of the Krugerrand is based on its gold content, which is linked to the prevailing gold price, as priced on the London market. When a Krugerrand is bought, a small premium is charged to cover manufacturing and distribution costs. Gold Krugerrands are not subject to value-added tax in South Africa.

COMMEMORATIVE INITIATIVES
South African Mint MD Tumi Tsehlo explains that to commemorate the golden jubilee year, the mint has launched limited edition, collectible Krugerrands, with the flagship offering in the anniversary range is the giant 50 oz gold coin. He notes that at 100 mm in diameter, the 50 oz coin is 50 times the size of the standard 1 oz Krugerrand. Only 55 of these coins are available for purchase.

Additionally, in commemoration of the fiftieth anniversary, one-off, limited-edition collectible Krugerrands are being offered in platinum and silver.

“Producing the one-off platinum and silver Krugerrands under the same brand that is synonymous with South African gold coinage is our unique way to commemorate the historic influence of the coin on the gold-bullion investment market,” says Tsehlo.

He adds that the South African Mint has also launched a series of limited-edition fashion accessories featuring bracelets and lapel pins in partnership with Elegance Jewellers as well as a patterned silk scarf in association with Blandat.

The golden legacy of the Krugerrand is also cultivated in the rest of the collectable coin range, which includes gold proof coins, such as the 5 oz gold coin, the much smaller one-twentieth of an ounce and one-fiftieth of an ounce coins, and the silver and platinum coins. The collectable coins are a premium offering for the avid collector and, therefore, are given “a superior high-gloss finish”, produced in limited quantities and come in custom packaging. They are not bullion (produced in unlimited quantities) and, as such, are sold at a higher premium than the bullion coin.

Tsehlo notes that a book, The Krugerrand Millions, written by Professor Francois Malan, has also been released to mark the milestone achievement. He says it provides a definitive narrative on how the Krugerrand became the world’s favourite gold bullion coin and follows a neat chronological order of events, offering insights into the coin’s early life, tumultuous growth years through apartheid and sanctions to the legend it has now become.