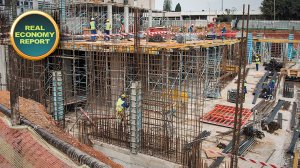 Schalk Burger:
Vendor-neutral data centre company Teraco is building a large new data centre next to its existing data centre in Isando, Gauteng. This is a result of sustained and growing demand for hosting and cloud services from across Africa and the company forecasts further sustained growth in demand.

Schalk Burger:
Teraco project manager Derick Muller details some of the technical construction challenges encountered and the rapid pace of construction of the project, which broke ground in October in the past year and will be complete by December this year.

Sashnee Moodley:
Other news making headlines this week:
Sanral rubbishes Outa’s claim that GFIP was 321% overpriced, questions its motives
And, Google commits to training 1m people in Africa in 12 months

Google, in partnership with Livity Africa, has committed to upgrading the digital skills of some one-million people across Africa over the next 12 months by expanding its Digify digital training initiative onto a free-of-charge online training platform.
Google SA country director Luke Mckend: