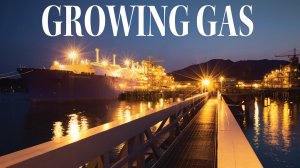 Government’s Gas Utilisation Master Plan (Gump), Integrated Energy Plan (IEP) and Integrated Resource Plan (IRP) underline that gas is not only a substitutable alternative to coal, but could also evolve to become a substantial part of South Africa’s energy mix.

Gas is flexible and can complement current energy sources. However, commentators also warn that, if considered in isolation, instead of holistically, the development of gas as an energy resource will be delayed.

Department of Energy Gump project manager Michael Fichardt says if gas were to be a signifi- cant addition to the energy mix, it could also potentially create a greater amount of renewable- energy capacity in future iterations of the IRP.

He adds that the primary gas demand could come from electricity generation, but expects the transport sector to be a key demand driver in the longer term.

But where will the gas come from? In the short term, Fichardt suggests that South Africa’s indigenous gas supply could be generated from the Ibhubesi gas project, off the West Coast, and from the Bredasdorp basin, off the South Coast. There is also potential for further offshore production and, in the medium to longer term, shale gas and coal-bed methane (CBM) are also likely sources.

Import Potential
But Fichardt believes South Africa’s gas supply could initially require imports, either through the creation of liquefied natural gas (LNG) infrastructure, or through the building of another gas pipeline to link South Africa to the large-scale gas finds in Mozambique.

“South Africa’s gas supply can be sourced from the Republic of Mozambique Pipeline Investment Company and the Rovuma gasfield by importing the gas using a pipeline from Mozambique. We can also source CBM gas from Namibia and Botswana, as well as import compressed natural gas (CNG),” he states.

Shoobridge explains that, worldwide, LNG demand is growing at 5% a year and the market is expected to double in size by 2020, while the number of countries importing LNG nearly doubled from 2010 and this trend is expected to continue until 2020.

Further, the infrastructure development for gas will include a CNG import terminal, transmission pipeline options, distribution infrastructure, as well as reticulation and gas storage facilities.

Fichardt says that, in the short term, South Africa requires LNG imports and infrastructure for a pipeline and that, in the long term, the development of indigenous gas resources will be required.

“Gas will ultimately decrease South Africa’s carbon emissions and provide the country with cheap energy and a competitive economic advantage,” he says.

Domestic Gas Market
Energy and petrochemicals group Sasol public policy and regulatory affairs GM Johan Thyse says there are significant benefits to developing a gas market. These include a reduction in carbon emissions, as is being demonstrated by the US with its shale gas revolution. But these benefits will have to be weighed against the costs and risks associated with integrating gas into the domestic energy mix.

“Factors that contribute to the successful development of the gas industry in South Africa include anchor customers to provide a baseload; multilateral involvement and collaboration, underscored by a partnership approach; understanding the needs and requirements of the role-players in such a partnership; a gas master plan; and an enabling and supportive regulatory and fiscal environment.”

Regional collaboration could also help develop the industry and, while South Africa should focus on developing its own resources, it must not lose sight of available resources within the region, Thyse points out.

South Africa’s gas resources includes the CBM pilot plant in the Waterberg, in Limpopo; shale gas, in the Karoo; and new licences for exploration activities in the Orange basin, on the country’s west and east coasts.

Meanwhile, the Southern African Development Community region holds 21-trillion cubic feet of gas and 11.1-billion barrels of oil, with several offshore finds since 2010 in the Rovuma basin, in Mozambique, and in Tanzania, he says.

Policy Challenges
Thyse says the innovative use of existing policy and regulation can also assist in developing gas infrastructure.

“South Africa has overarching and enabling legislation. Current policy provides a good platform for developing gas infrastructure, but it is not enough – additional policy direction is needed to further advance and facilitate investment in gas infrastructure.

“This investment will not happen by chance. Further investment must be deliberate and conscious, underpinned by a coherent policy approach, from a national and regional perspective,” he stresses.

Further, the uncertainty created by the Mineral and Petroleum Resources Development Act (MPRDA) Amendment Bill in the oil and gas sector in South Africa has come to the attention of new Mineral Resources Minister Ngoako Ramatlhodi, who is echoing the concerns of many companies and stakeholders.

The Minister has, therefore, advised President Jacob Zuma not to sign the Bill to give him time to deal with the sector’s concerns.

The publication outlined Ramatlhodi’s options of either recommending that the Bill be sent back to Parliament to review contested clauses, or that a separate Petroleum Bill be drafted so that legislation affecting the hydrocarbons industry are separate from that affecting the mining sector.

Fichardt notes that, besides the legislation, South Africa’s other gas policy drivers include the National Development Plan (NDP) the IEP and the IRP.

According to the NDP, there is a need to increase the diversity of South Africa’s energy production mix, mitigate the effects of climate change by lowering carbon emissions and investigate gas as an energy source.

The IEP states that gas currently comprises up to 3% of South Africa’s total energy mix. It also highlights the potential for exploring significant shale gas and an LNG terminal underpinned by a gas-fired independent power producer programme.

The IRP highlights the planned introduction of gas-fired generation into the country’s generation mix.

But these aspirations are counterbalanced by limited domestic supply, owing to declining reserves in the Bredasdorp basin. In addition, major exploration and development expenditure is required before the country can be assured that there is indeed a large amount of shale gas in the Karoo and offshore.

Moreover, there is still much uncertainty about the environmental framework under which shale-gas exploration and development can proceed.

This, together with the other regulatory, technical and commercial opportunities and risks, emerged as key themes of the recent Gas Week conference, in Johannesburg. The informal conclusion was that much more thought and planning needs to be given to the role that gas can play in helping to improve security of supply and in meeting some of South Africa’s environmental commitments.

Should the sector’s initial growth hinge materially on gas imports, policymakers and investors will also have to consider ways to mitigate a possible ‘dollarisation’ of South Africa’s electricity mix, particularly given ongoing concerns about rising electricity prices.

Where there is strong consensus, though, is that gas can and should play a far more promi- nent role in South Africa’s future energy mix.