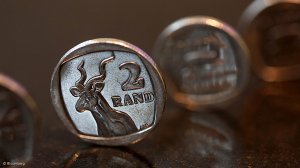 South Africa's rand weakened early on Tuesday, giving back most of its gains from the previous session, ahead of the release of domestic data that is expected to show the economy had slipped into a recession.

At 0630 GMT the rand was 0.75% weaker at 15.500 per dollar, retreating from a session-best 15.385 on Monday, as emerging markets rallied on the world's biggest central banks hinting at cutting lending rates.

The Chinese, Japanese and US central banks have all indicated willingness to take monetary measures to limit the economic damage from the coronavirus outbreak, renewing flows into high-yielding emerging assets.

But on Tuesday hopes of rate cuts were dampened after Reuters reported that a meeting of G7 finance ministers and central bank governors was unlikely to produce any fresh fiscal or monetary pledges.

"After recording a contraction of 0.6% q/q in Q3, prospects of an economic recovery for the domestic economy in the final quarter of 2019 and the early stages of 2020 appear limited," said economists at ETM Analytics in a note.

Low growth has piled on pressure on state revenue and raised the risk of deeper credit downgrades, putting off investors, although the high yield on the rand and local bonds has limited the selloff.

Bonds were firmer, with the yield on the benchmark 2026 government issue down 8 basis points to 8.075%.