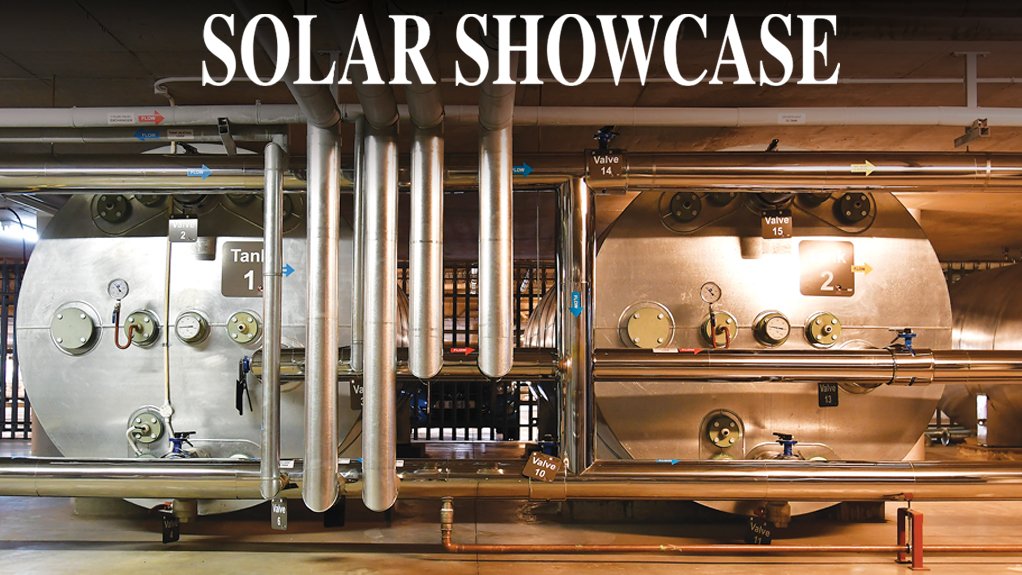 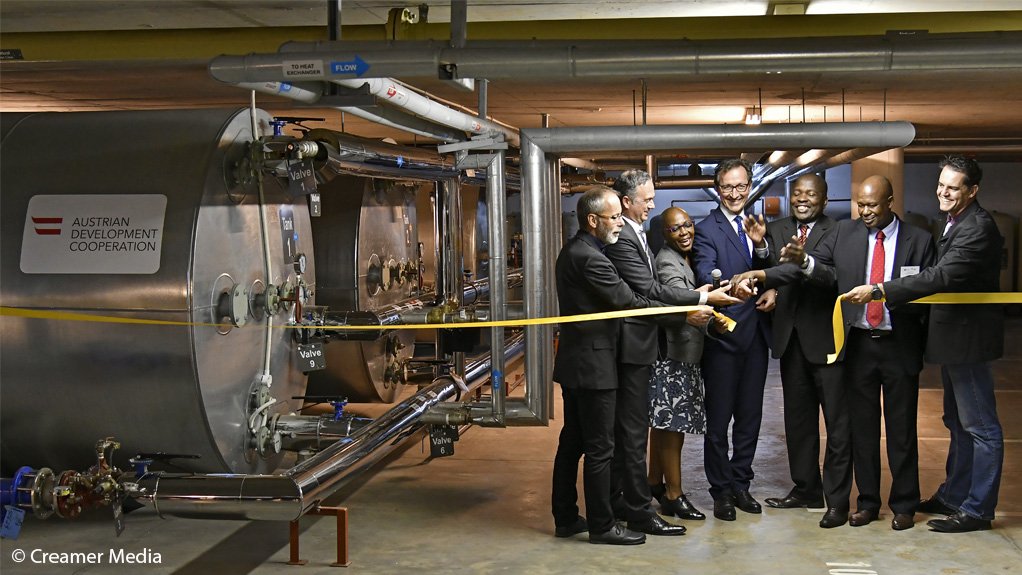 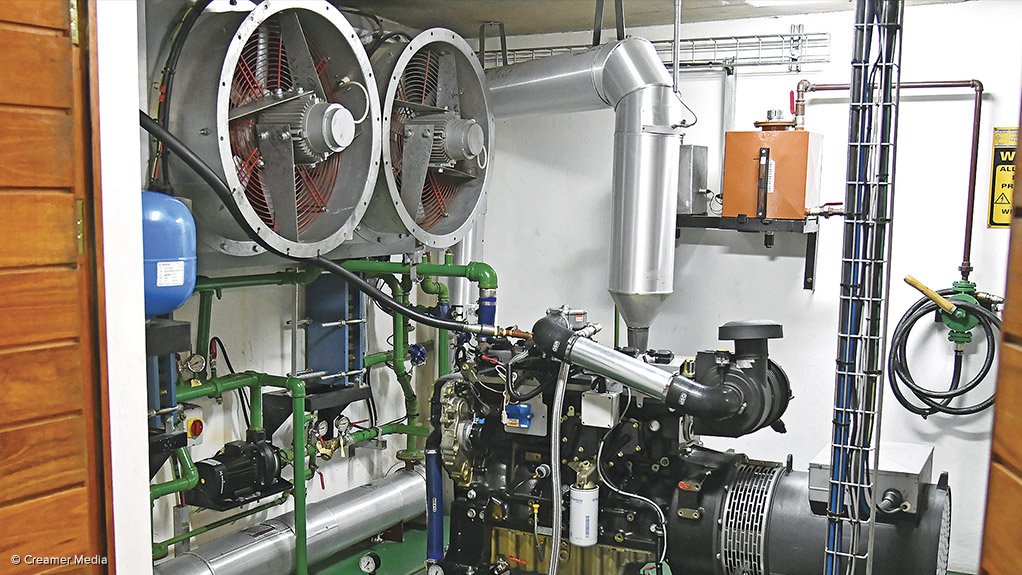 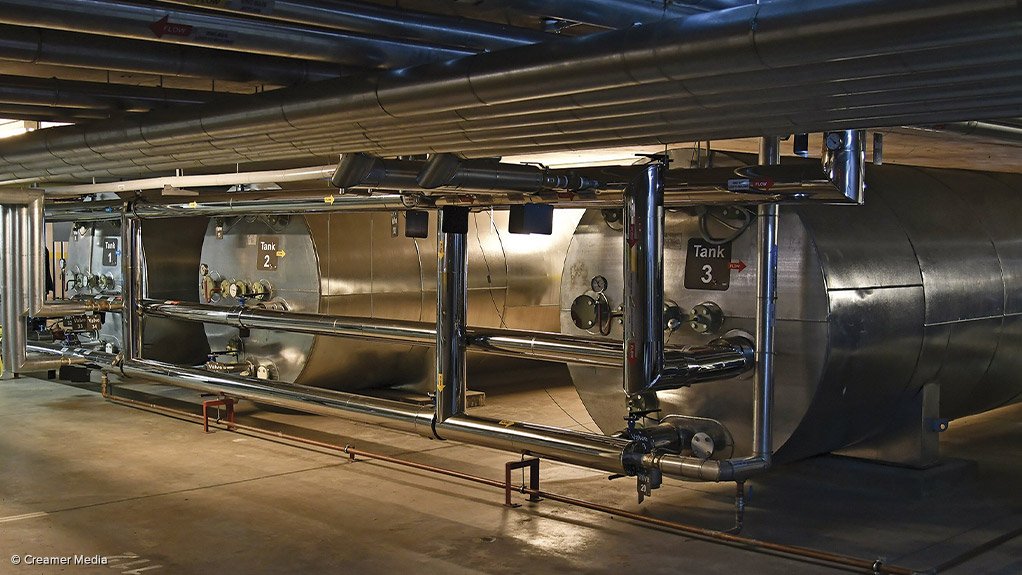 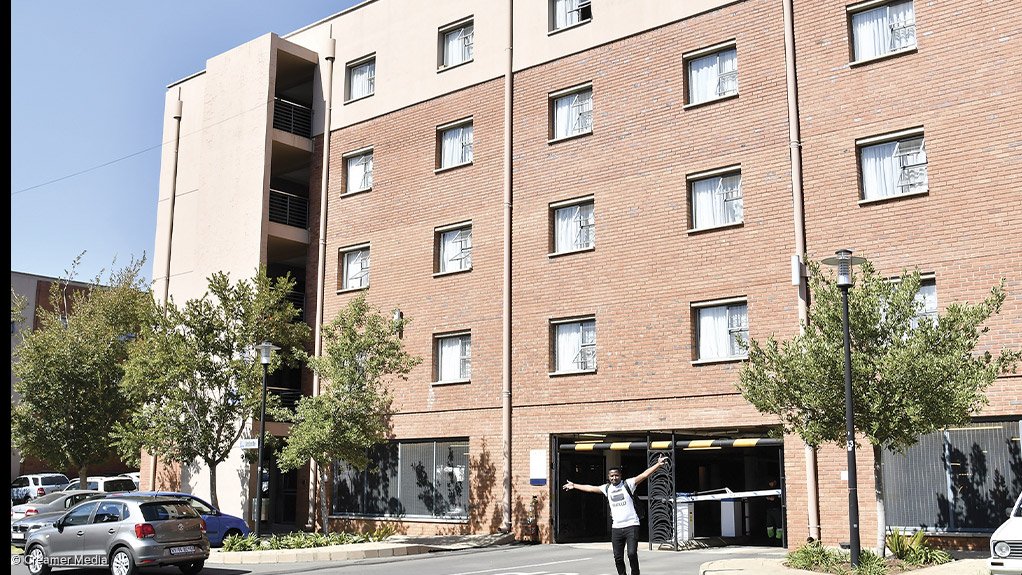 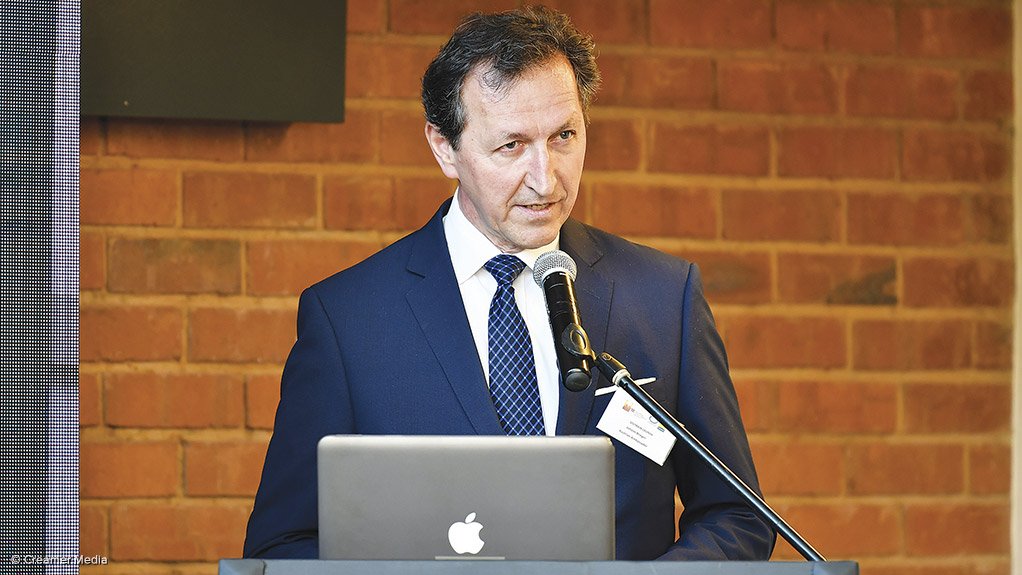 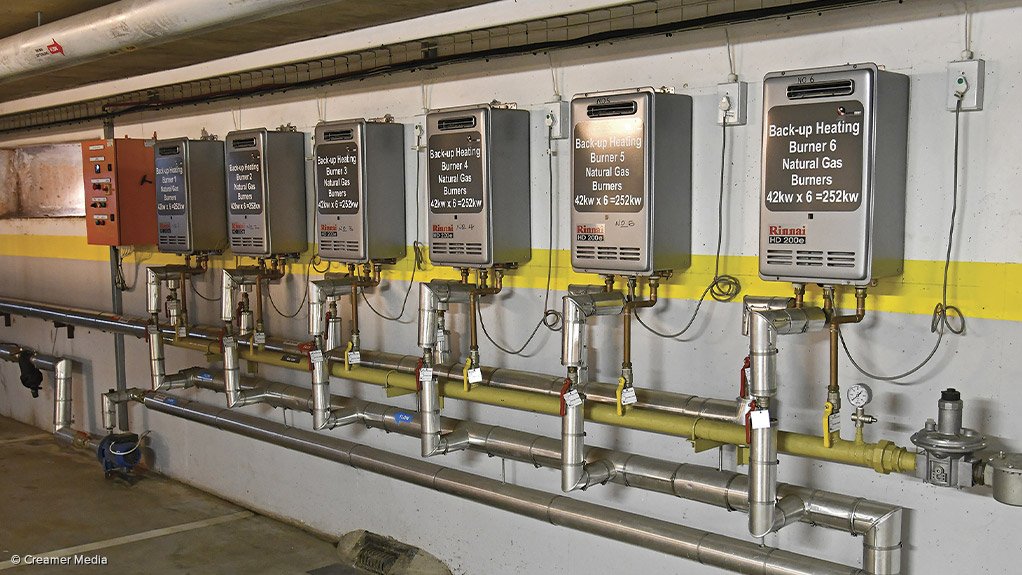 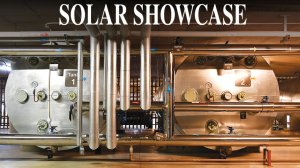 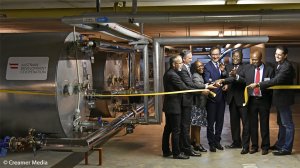 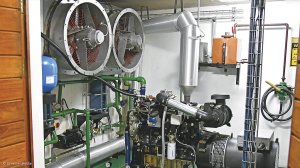 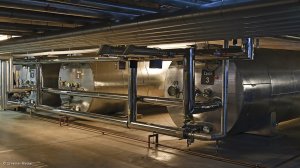 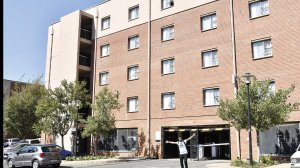 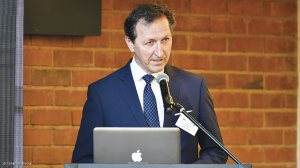 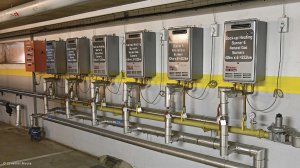 The first solar district heating system was launched in South Africa by Austrian ambassador to South Africa Dr Johann Brieger on May 15 at the University of the Witwatersrand’s (Wits’) Junction student residences, in Parktown, Johannesburg, through a partnership facilitated by the South African Solar Thermal Training and Demonstration Initiative (Soltrain).

To further showcase the power of the sun in relation to water heating processes, the largest solar process heating system in sub- Saharan Africa was launched on the same day at the Klein Karoo International (KKI) tannery, in Oudtshoorn, Western Cape.

Soltrain is a regional initiative aimed at building capacity and demonstrating the potential of solar thermal systems in the South African Development Community (SADC) region. In turn, the aim of Soltrain is to support the target countries in changing from a largely fossil-based energy supply system to a sustainable supply structure based on renewable energy, in general, and solar thermal, in particular.

The programme in South Africa is managed by the Centre for Renewable and Sustainable Energy Studies, at Stellenbosch University, in the Western Cape, and the South African National Energy Development Institute, in partnership with AEE-Institute for Sustainable Technologies (AEE Intec), of Austria.

A large percentage of world power consumption comprises water and space heating, with the US Department of Energy stating that 18% of the energy consumption of US homes is used for water heating.

According to a review of domestic hot- water consumption in South Africa, compiled in 2000 by Josua Meyer, the average middle- income household’s electricity use showed a 39% allocation to geysers, while space heating accounted for 16%.

Owing to South Africa's mild climate, hot-water consumption, and not space heating, is the largest user of energy in the domestic sector, according to the review.

Although estimates vary, for an average middle- to upper-income household, figures for water heating as high as 40% to 50% of monthly electricity use have been quoted in the South African Energy Policy Discussion Document.

Therefore, the launch of the Wits Junction and KKI water heating systems will prove pivotal in demonstrating how the application of water heating through solar energy can be used on a large scale as well as commercial scale to decrease costs and emissions (as less power is required from commercial coal-fired power stations) and ensure that energy-intensive processes are increasingly sustainable in the future.

“With a broad transition to solar thermal systems for hot-water preparation in not only the residential but also the commercial and industrial sectors, the electricity sector in the SADC area could be massively relieved and, moreover, also contribute to the reduction of carbon dioxide (CO2) emissions, since the vast majority of the power plants in the region are run on coal,” says AEE Intec director Werner Weiss.

He explains that the 326 solar thermal systems built to date in the Soltrain programme have a solar yield of 1 834 MWh/y, thereby saving about 2 000 MWh/y of electricity and, consequently, reducing CO2 emissions by 638 t/y.

“If 1 kWh of electricity is valued at R0.2139, the installed solar thermal systems save R4.3-million in electricity costs a year,” exclaims Weiss.

The system meets the demand for hot water required in kitchens, as well as for laundry, cleaning and other domestic uses, such as personal hygiene.

The previous domestic systems were distributed on multiple roofs; the new solar layout is on one central roof.

The plant also comprises redundancy systems to ensure hot-water supply during maintenance periods and a backup water system consisting of 300 000 ℓ tanks. The installation of a more advanced logging and measurement system is also planned.

Average consumption for the residence, located on 4.5 ha premises, is 94 000 ℓ/d of hot water, with peak demand in the morning comprising about 30% of daily consumption. Maximum demand peaks at 28 200 ℓ/h.

Since the system was commissioned, complaints about a lack of hot water have reduced by 98%, says solar equipment supplier BlackDot Energy CEO Wally Weber. Blackdot was appointed project leader and the engineering company for the water heating plant.

Weber also estimates cost savings of up to R40-million over the next 20 years. “The university has already noted substantial electricity savings over the trial period of eight months,” he says, adding that the electricity cost of the cogenerator is equal to the municipal cost, thereby resulting in the thermal energy being essentially free.

“The system has been a major success in meeting not only financial and energy savings parameters but also service delivery levels, which have vastly improved. The small interruptions are from the municipality or ring main circulation pumps being blocked because of debris in the water”, says Weber.

He adds that the plant was completed in under six months.

Meanwhile, Wits has committed to two further hybrid cogeneration projects – a 160 kW hybrid project, which will be three times the size of the Wits Junction plant, and a 200 kW plant at the Three Sisters residences.

“This is part of a future solar thermal cooling network that we are putting in place,” Weber notes.

KKI was established in 1945 and is the biggest supplier of ostrich leather in the world. A large portion of the company’s operating costs is allocated to producing hot water for tannery processes.

Plant installer E3 Energy MD Doran Schoeman says Stellenbosch University approached various tanneries for process heat application viabilities. KKI tannery was the most forthcoming and had the budget to contribute to the study to determine the viability of replacing or supplementing the tannery’s existing fuel oil heating system with a solar water heating system.

The existing process-water heat infrastructure uses an oil burner and not electrical heating. The fuel source is LO10 paraffin oil, at an indicated rate of 11.8 kWh/ℓ.

“The feasibility study design was that solar would displace the local fuel, indicated as 60% solar fraction. The savings, based on measurements from the plant, indicate 285 000 kWh, with an average indication of R265 000 for eight months, or 24 150 ℓ of oil,” notes Schoeman.

In this regard, Stellenbosch University indicated a payback period of 6.5 years based on 60% solar fraction – an estimate derived from a financial model analysis from the feasibility study, which includes maintenance, finance costs and all system- related expenses.

The KKI tannery process-water heating plant has an installed collector area of 556.8 m2, with a storage facility comprising two 20 000 ℓ tanks. The yearly solar yield is 397 MWh, thereby helping the tannery to reduce its reliance on burning fuel oil and avoiding 137 t of CO2.

“Strategically, the approach was to implement a first phase of renewable energy using solar thermal, and monitor actual results to implied savings. There has been no further commitment as yet, as the analysis is still in progress,” says Schoeman.

Weber emphasises the importance of replacing energy-intensive water-heating applications with those that rely on solar energy as a means to futureproof sustainable development. “South Africa already has the infrastructure to implement this type of plant – [large-scale solar water heating and district water heating].”

However, he notes that, although many consumers might want to move towards renewable energy for water-heating purposes, the capital and partnerships might be lacking.

However, through programmes such as Soltrain, and with the help of the Austrian Development Corporation, key partnerships have been formed, and a lot of “convincing work” has been performed to demonstrate how solar water heating systems can be implemented fast, he says.

“The Austrian and Soltrain support is much more than just the funding – it is creating confidence with these partners,” concludes Weber.