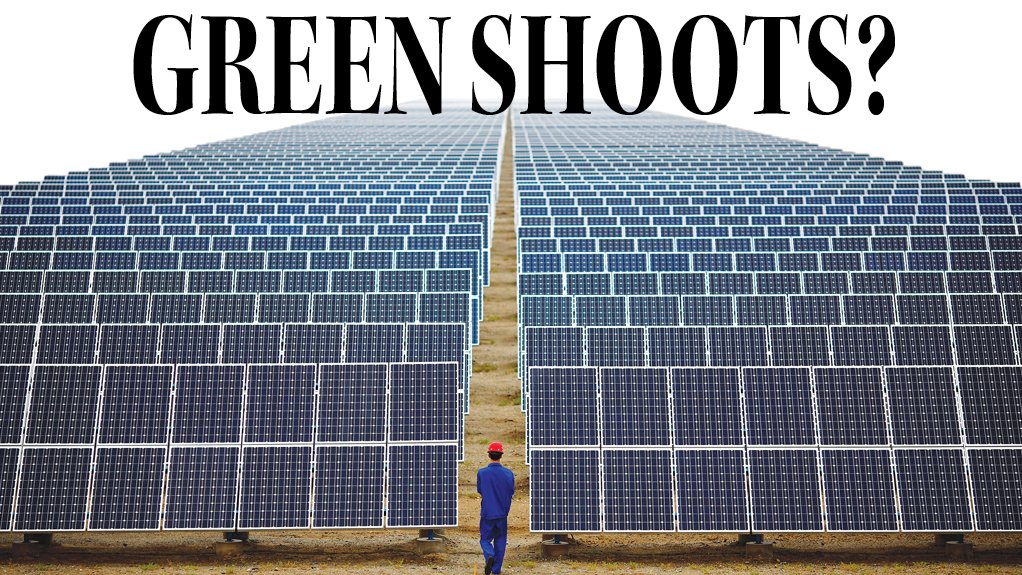 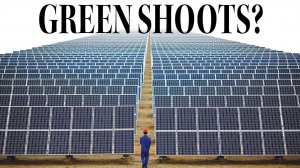 The South African government has identified the green economy as one of 12 job drivers that could help contribute to what increasingly appears to be a highly ambitious target of creating five-million additional jobs by 2020. In fact, the New Growth Path, in which the sectoral jobs targets are disaggregated, envisages that as many as 300 000 new direct jobs could be created in the areas of natural resource management and renewable-energy construction.

Targeted actions include using the expanded public works programme to upscale recycling and community cleaning programmes, as well as supporting the manufacture, deployment, operation and management of green tech- nologies, both on a large utility-type scale, as well as at household level. Government also accepts that such roll-outs, whether they involve the removal of alien vegetation, the construction of wind farms or the installation of solar geysers, will require fiscal support.

But how is South Africa doing in meeting its green jobs aspirations?

Policy Support
He notes that Cabinet endorsed the National Strategy for Sustainable Development 2011, which identifies five strategic priorities, including the green economy. In addition, the Industrial Policy Action Plan outlines strategic initiatives to develop green industries and improve energy efficiencies, while the National Climate Change Response Policy highlights a set of near-term flagship programmes that underline the progressive transition towards a greener economy.

“Government signed a series of accords with social partners and organised business between 2011 and 2013, which will assist the country in unlocking several challenges that could serve as a barrier to the attainment of green economy targets,” says Ramaru.

The Green Economy Accord identifies 12 areas of commitment for partnership between government and social partners under the green economy – rolling out solar water heaters, investing in the green economy, rolling out renewable energy, energy efficiency, waste recycling, reusing and recovering biofuels, clean-coal initiatives, retrofitting buildings, reducing carbon-emissions in the energy and transport sectors, the electrification of poor communities and reducing fossil-fuel open-fire cooking and heating.

Ramaru belives that these green economy interventions have yielded some positive results, pointing specifically to the installation of solar water heaters, where government has committed to a target of ensuring the installation of one-million solar water heaters at household level by 2014, the introduction of energy efficiency, the contraction of more sustainable transport systems, such as the Gautrain and the Rea Vaya, and the continuation of natural resource management programmes. There is a greater green sensitivity within government, with a number of departments moving ahead with green-building projects.

The Department of Environmental Affairs (DEA) has, to date, also successfully launched the Farming the Wild project, a community- based initiative to green the rural economy of the uPhongolo local municipality, located in the northern area of Zululand, in KwaZulu-Natal; the Youth in Waste Programme, which is the result of a study that the DEA undertook in 2007, which assessed the status of waste services delivery, as well as capacity at local government level; and the R300-million Groen Sebenza project, which was launched last year and is aimed at developing skills through accredited training and bridging the gap between education and job opportunities in the biodiversity sector.

Nevertheless, the sector still faces a number of obstacles, with skills deficiencies recognised as a major constraint in many sectors, including renewable energy, energy and resource efficiency, green building and retrofitting, environmental services and green manufacturing.

That said, South Africa is leading the discussions on the green economy and the development of tools and policies to unlock the relevant growth and employment potential in sub-Saharan Africa and globally, states International Labour Organisation (ILO) technical officer Karl Pfeffer.

“South Arica is considered to be one of the countries where the design of conducive policy frameworks is not the primary challenge. Sectoral policies and intervention frameworks also embrace green ideas, for example, those focusing on promoting renewable energies and ecotourism. The Green Fund, as a specialised entity to promote the uptake of the green economy and the creation of green employment, can be considered as a leading example to institutionalise government’s efforts to facilitate the transition,” he says.

To date, the Green Fund has received a total of 590 funding applications for potential sustainable-development projects worth R10.9-billion.

But, while new and more policies are most probably not the key area of concern for South Africa, improvements in policy coherence and their actual application at all levels of government should be the focus.

To trigger green growth, an inclusive and people-centred approach is also advocated. “When talking about green jobs, the ILO focuses not only on the actual numbers of jobs created but also on the quality of these jobs. By considering aspects such as workers’ rights and occupational safety, social protection and social dialogue, we do not only create the basis for sustainable businesses but also ensure that growth translates into decent employment and creates opportunities for people to live in dignity,” he says.

He notes that dialogue remains a crucial issue, as progress in the green economy and in creating green jobs will hinge on the level of buy-in from multiple stakeholders.

Renewables Progress
One area where there is already some traction and where South Africa is beginning to achieve both progress and even leadership is in its deployment of renewable energy.

Following three competitive bidding rounds under South Africa’s Renewable Energy Independent Power Producer Procurement Programme (REIPPPP), 64 projects have been selected to proceed, of which 47 are either under construction or already operational.

The projects have attracted investments of over R100-billion.

The Department of Energy (DoE) has published an updated request for proposals for the fourth REIPPPP bid submission date, where bid registration is scheduled for July 21 and submissions for August 18. Preferred bidders should be announced on October 28.

Government has secured commitments for the supply of 3 725 MW of renewable energy by 2016 as a first step to realising the goals for renewable energy under the Integrated Resource Plan (IRP) 2010-2030.

Frost & Sullivan energy and environment analyst Gareth Blanckenberg says the fact that government views the renewable-energy sector as a source of job creation is already positive.

He points out that the DoE has set out reasonable targets for renewable energy in the IRP for electricity, which is currently being updated. “Greater certainty around future allocations would perhaps spur original- equipment manufacturers to invest to a larger degree in local manufacturing and production,” Blanckenberg says.

Blanckenberg comments that the absolute level of job creation is proportional to the size of the market. On a jobs per megawatt basis, the numbers in South Africa are comparable to those of any other market. “The renewable energy market in South Africa holds great potential, especially in areas such as distributed generation. It remains to be seen how it will develop.”

Green Entrepreneurs
Meanwhile, Pfeffer adds that entrepreneurs and their small to medium-sized enterprises (SMEs) are the drivers of job creation in an economy generally, and the green economy is no exception. “This is also the case in South Africa, where we have counted more than five-million small businesses which create a significant number of jobs for low- and high-skilled workers.”

A shift to a green economy requires new ways of doing business and generating innovative products and services. Companies that are driven by values and are ready to take risks need to make their vision of a greener economy a reality.

“In South Africa, the ILO is implementing the Sustainable Enterprise Development Programme in collaboration with the South African government to create this culture of entrepreneurship and support innovation in businesses among the youth. Currently, we have programmes in place in the Free State and we are planning to roll out these programmes in KwaZulu-Natal and in the Eastern Cape,” he says.

Pfeffer explains that the market for green products and services is constantly expanding.

“In South Africa, there is an increase in the installation of solar water heaters and solar photovoltaic panels in commercial buildings and private dwellings. However, we are nowhere near the levels of installation, compared with countries in Europe, the US or Japan, which is surprising, since Southern Africa has one of the highest numbers of sunny days in the world and significantly higher levels of radiation.”

Pfeffer notes that the perceived market for green products and services is often limited to technologies and products that are visible and more tangible.

In many cases, green solutions also do not require high levels of investment and sophisticated technologies, thereby allowing the solutions to introduce products and services to the market that people in the lower income strata of society can afford. In countries such as South Africa, this unlocks an enormous market potential.

“Market uptake of green products and services depends strongly on people’s perception and we know that the market for green products and services is a social construction that can be created, changed, modified or moulded in various ways,” he states, adding that entrepreneurs form a vital part in defining this market and stimulating market demand through suitable offerings.

The market and market demand is also influenced by the perceptions, attitudes and values of consumers, issues of trust and awareness.

“Consumer values are driven by intangible meta-level stands in a direct dialectic relationship to the legal and regulatory framework. Laws and regulations can shape values and vice versa. For example, the moment we start to incentivise and reward separation of waste and recycling through legal frameworks, people will act accordingly. This will boost the recycling and waste sector, pushing new waste entrepreneurs on the market and, hence, create green jobs,” he concludes.