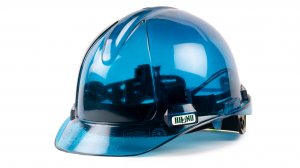 The Rhino clear polycarbonate safety cap from personal protective equipment (PPE) supplier Pienaar Bros is the first locally produced clear safety cap of its kind to be offered to the South African market.

Its launch was initially scheduled for March 2020, but was delayed to November last year, owing to the Covid-19 pandemic.

While the company had always considered introducing a clear, or “see through”, safety cap, it had also received requests from certain industries for a cap with a clear shell to monitor the smuggling of contraband into restricted areas.

“The visibility provided through the peak of the cap also enables workers to look up while climbing ladders and scaffolding without having to pivot their heads too far back, resulting in either the safety cap falling off their heads or neck strain from over extension,” adds Van der Merwe.

Development of the clear safety cap involved choosing a polymer that would yield the results the company was looking for. Polycarbonate was the best choice, as it provides the best clarity after moulding. In-depth research also revealed that polycarbonate has a high melting point, allowing for the safety cap to remain stable when faced with sudden high ambient heat scenarios.

Polycarbonate plastic also has high impact resistance, owing to the molecules being far smaller than standard high-density polyethylene plastic, allowing the molecules to bind together tighter during moulding.

“Our initial batch of samples were subjected to our in-house testing, which is identical to the requirements of the SABS. This included weight impact and penetration impact testing at certain temperatures, with favourable results achieved,” states Van der Merwe.

However, producing a flawless result ­– absolute clarity of the polymer – was challenging as polycarbonate is a hydroscopic plastic. This required the removal of moisture from the material before processing could begin.

“Therefore, dehydration had to be carried out to aid, and moulding settings had to be manipulated on the machine to acquire, a perfect result. This step alone took us about six months to master,” explains Van der Merwe.

A plastics specialist was brought in to guide Pienaar Bros through the trouble shooting process and identified the faults the company was experiencing, exponentially improving on initial results.

An estimated 11 000 units are manufactured in a month at Pienaar Bros’ Wadeville factory, in Johannesburg, depending on colour variations and the changeover of colours. About ten people are involved in the manufacturing process from beginning to end.

“All our polymers are locally sourced and supplied by South Africa-based businesses, with most virgin polymers originating from the Middle East. The head lining installed in the safety cap is manufactured and assembled on-site in our factory, while an outsourced local supplier is contracted to sew a portion of the ratchet liner,” adds Van der Merwe.

The quality of each shell is inspected at the machine after each “shot” as working with polycarbonate can be quite volatile in terms of machine settings, he says.

Therefore, an operator has to monitor the run closely. Any imperfections in the finish are set aside for destruction, to be recycled at a later stage. During assembly, the shell and head lining are also scrutinised and set aside for further inspection or destruction if defects are found.

Pienaar Bros plans to export its range of Rhino clear safety caps to the rest of sub-Saharan Africa and has at least five on-site stores supplying PPE in Botswana and Mozambique.