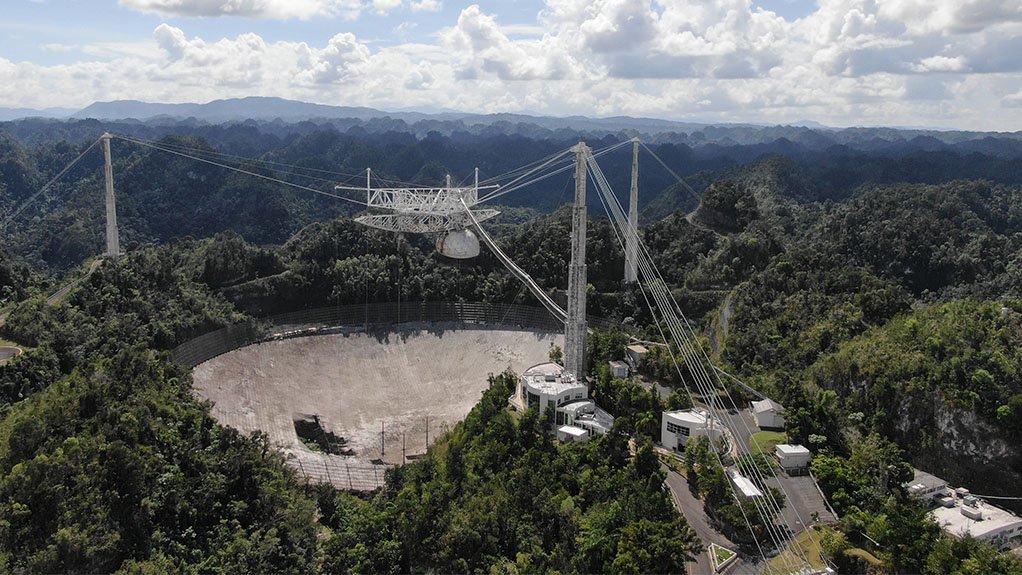 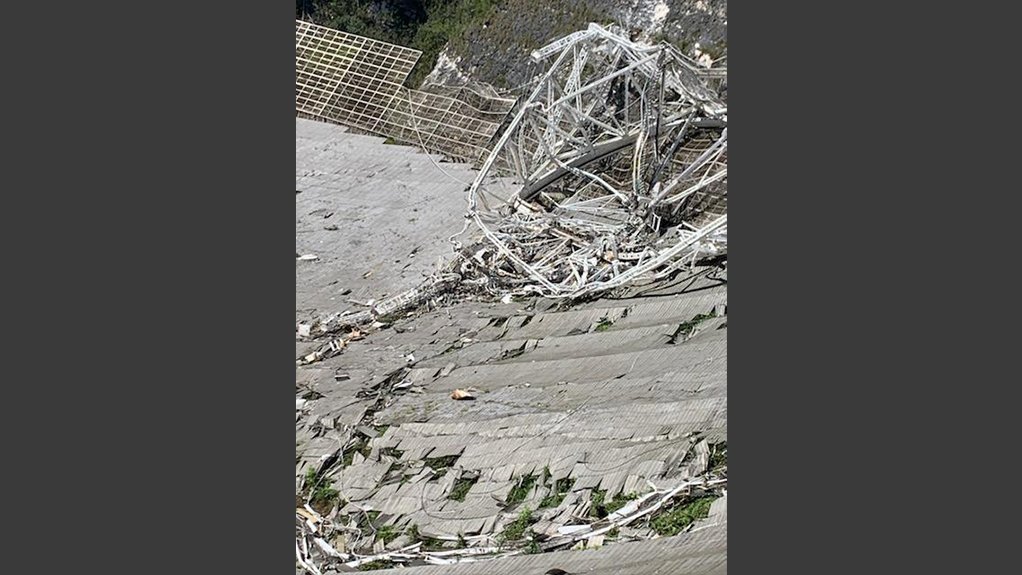 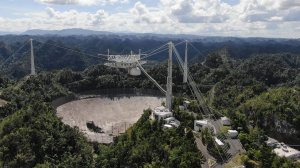 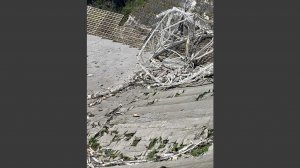 Photo by University of Central Florida
The Arecibo radio telescope, photographed after the first main cable break in November but before the fall of the suspended instrument platform. Damage to the dish is clearly visible.
Photo by University of Central Florida
A view of part of the Arecibo dish following the collapse, showing the wrecked instrument platform and severe damage to the dish.

The feared but expected collapse of the famed Arecibo radio telescope, in the US territory of Puerto Rico, happened just before 08:00 Tuesday local time (just before 14:00 South African time). Fortunately, there were no injuries.

Last month, the US National Science Foundation (NSF) announced that it was going to decommission the 305 m diameter radio telescope because it had become structurally unstable. In August, an auxiliary support cable had “detached” from its tower and smashed into the dish below, leaving an about 30 m gash in it. The NSF authorised engineering analyses as the first step in a repair process. These studies were still under way when, early in November, a main cable, connected to the same tower, broke, inflicting more damage on the dish.

On Tuesday, one of the remaining main cables seems to have snapped or detached from its tower, causing the instrument platform to fall. But because it was still connected to the other two towers by the remaining main cables, it did not fall vertically but swung down in an arc and smashed into the upper rim of the dish, in the process also damaging other facilities at the site. The observatory’s Learning Centre, in particular, suffered significant damage. Further, the tops of all three of the cable support towers broke off as the platform fell, and its remaining support cables dropped.

“We are saddened by this situation but thankful that no one was hurt,” said NSF director Sethuraman Panchanathan. “When engineers advised [the] NSF that the structure was unstable and presented a danger to work teams and Arecibo staff, we took their warnings seriously and continued to emphasise the importance of safety for everyone involved. Our focus is now on assessing the damage, finding ways to restore operations at other parts of the observatory, and working to continue supporting the scientific community, and the people of Puerto Rico.”

The other installations at Arecibo include a Light Detection and Ranging (better known as Lidar) facility, a 12-m-diameter radio telescope dish and a visitor centre. The observatory also has a Remote Optical Facility on the small Puerto Rican island of Culebra. All these will remain in operation.

For 53 years, the fixed Arecibo radio astronomy dish was the largest single-aperture telescope in the world. It was only eclipsed in mid-2016 when China’s 500-m-diameter Aperture Spherical Telescope was commissioned. It was arguably the most famous American radio telescope, and certainly one of the most famous in the world, and featured in a number of TV series and films, including GoldenEye and Contact.