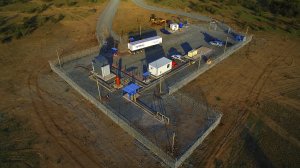 The current global recession is accelerating the transformation to cleaner energy sources and the use of liquefied natural gas (LNG) in transport owing to the need to reduce costs by as much as possible.

Within this context, emerging natural gas and helium producer Renergen CEO Stefano Marani says the world is pushing to reduce running costs as much as possible, and with savings of between 15% and 25%, LNG fuel in heavy logistics is the way to go.

In discussing whether a mindset change is needed to kickstart the increased adoption of LNG, Marani notes that LNG “appeals to the wallets” of logistics companies, which, like any other business, have “a fiduciary responsibility to cut costs for shareholders”.

This would be the deciding consideration for the logistics sector to adopt a new technology, or clean fuel, especially as the infrastructure and technology are already available.

Dedicated filling points in South Africa, which are being established through a partnership between Renergen and Total South Africa, give certainty to customers, Marani says, noting that the company has seen a “massive upsurge” in demand for the remaining product at the company’s Virginia gas project, in the Free State.

The first route targeted under the agreement with Total will be the N3 between Johannesburg and Durban, followed by the corridors leading to the other major cities once Renergen’s Phase 2 project comes into production.

These filling stations will be up and running by the start of the third quarter of 2021, at the latest, says Total South Africa regional sales manager Lebogang Buthelezi.

The agreement with Renergen is in line with Total’s strategy to move towards a more carbon-neutral space, with cleaner and more sustainable energy sources.

Renergen is also in the construction phase of South Africa’s first commercial LNG plant and is expecting a turn-on date for the plant around the third quarter of 2021.

According to Marani, LNG displaces diesel use and reduces operating costs, while helping customers meet sustainability targets owing to the significantly lower greenhouse-gas emissions from natural gas over diesel.

Phase 1 will produce around 50 t of LNG daily, while Phase 2 will see this increase to the LNG equivalent of about 75 000 ℓ of diesel a day.

Renergen will have multiple delivery trucks across South Africa that will deliver the LNG fuel to multiple sites once the project is in its third phase, with long-term projections aimed at the establishment of filling stations in Cape Town, Johannesburg, Harrismith, Bloemfontein, Port Elizabeth and Durban.

The pilot project also includes helium resources, which will go to the export market, and will initially provide 350 kg a day of helium as part of the Phase 1 development. Output will be increased to up to 10 000 kg of helium a day in Phase 2.

Marani previously told Engineering News & Mining Weekly that Renergen’s flagship project has the potential to be the answer to the world’s helium shortage woes following a recent helium prospective resources report, which confirms that the project has undiscovered gross recoverable helium volumes of more than 344-billion cubic feet.