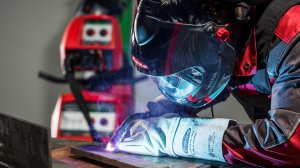 EASE OF CONTROL The pulse mode makes it possible to bypass the intermediate arc, which is difficult to control and prone to spatter

Austria-based photovoltaic manufacture Fronius is upgrading its TransSteel series with the addition of the pulse function, the company stated in a press release in September.

The pulse mode makes it possible to bypass the intermediate arc, which is difficult to control and prone to spatter. The resulting reduction in spattering leads to up to 70% less rework.

Additionally, the pulsed arc allows welding speeds that are up to 30% higher to be achieved. All these advantages are now also available from the Fronius TransSteel 3 000 compact as well as the TransSteel 4 000 and 5 000.

Further, the company noted that the TransSteel devices were developed especially for use on steel.

“The addition of the pulse function now makes these power sources true all-rounders, as a range of functions supports the welder in various applications. With the help of the spot function, even and consistent welding spots can be produced – ideal for tacking workpieces.”

Fronius added that interval welding not only produced a rippled seam appearance, but the lower heat input also reduced the possibility of material distortion on light gage sheets.

Special characteristics ensured the user had the ideal arc properties at their disposal. The steel universal characteristics were particularly suitable for simple and fast welding applications, the company explained.

In addition, the steel root characteristics have been developed for root welding and also provide a soft and stable dip transfer arc for good gap-bridging ability over wide gaps. On the other hand, the steel dynamic welding program produces a particularly hard and concentrated arc, which achieves high welding speeds and deep penetration.

When it comes to pulse models, the TransSteel Pulse models with pulse-controlled spray arc characteristics provide the ideal settings, where minimal spattering and deep penetration are required.

In the press release Fronius noted that with the SynchroPulse, the welding power alternated between two operating points at a frequency of up to 5 Hz.

“As the change between high and low current facilitates welding in a vertical up position, for example, it is possible to produce a pronounced seam rippling on aluminum alloys.”

Moreover, the company added that the intuitive operating concept of the TransSteel allowed immediate commissioning of the device without any previous knowledge. This meant that all the necessary welding parameters could be set on the front panel.

“A simple option for documenting the welding data completes the device concept. A USB thumb drive can be connected to the rear of the power source to store all important data – including time- and device-related data, but also the parameters used such as current, voltage and wire speed.”

Fronius pointed out in the press release that it had added the pulse function to three models.

The TransSteel 3 000 compact Pulse is a multiprocess device that masters all three welding processes to the same high degree. “The compact unit is ideal for a range of welding tasks on the construction site, in the workshop, or for repair work.”

“For recurring welding tasks or in small series production, the pulse function on the TransSteel 4 000 Pulse and TransSteel 5 000 Pulse brings more options and speed. In contrast to the compact version, these higher-power units have a separate wirefeeder.”