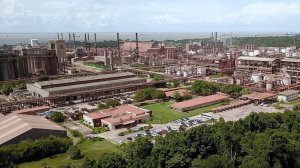 The Alunorte alumina refinery, in Brazil

OSLO - The green transition is under threat unless governments can level the playing field between metal producers who are forced to pay offset costs for their emissions and those who are not, the CEO of aluminium maker Norsk Hydro said on Monday.

"Some are subject to the world's most ambitious climate policies, while others are not," CEO Hilde Merete Aasheim said in a keynote speech at the opening of LME Week in London, the metal industry's yearly summit.

"If some of the world's greenest production has higher CO2 costs than many of those producing with a formidable CO2 footprint, that is not an efficient incentive structure to promote a speedy and successful green transition," she added.

Aasheim's comments come weeks ahead of the United Nations' COP26 summit in Glasgow in November, where countries will attempt to finish the technical rules to put the Paris Agreement into effect.

The aluminium industry is one of the metals sector's largest emitters of greenhouse gas, but companies have in recent years launched a raft of products with lower carbon dioxide emissions, largely by either using hydropower or recycled material.

Production of the lightweight metal used in food packaging, cars and construction is heavily electricity-intense, and China, the world's dominant producer, has a smelter sector still overwhelmingly dependent on coal.

The European Commission in July put forward plans for an import tax on some carbon-intensive products, designed to protect European industries from competitors abroad who can produce at lower cost because they are not charged for their carbon output.

Norway's Hydro, one of the world's top aluminium makers with operations in 40 countries, aims to reduce CO2 emissions by 30% by 2030.

Installing a cleaner energy mix at the company's alumina refinery Alunorte in Brazil - which runs on heavy fuel oil - is one of Hydro's main priorities for reaching that goal, along with offering verified low-carbon and recycled aluminium.

"The response is good; we are experiencing a great traction in the market," Aasheim said.

Global shortages of many raw materials and components arose when restrictions related to the COVID-19 pandemic started to ease, creating a commodity "super-cycle".

Hydro raked in record profits in the second quarter this year after aluminium prices rose sharply, aided by the global economy, but pandemic restrictions have left a legacy of supply-chain bottlenecks.