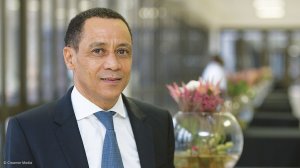 SAEC is the name that the ASX- and JSE-listed South32 gave to its South African coal assets that are now being acquired by Seriti, a broad-based, 91% black-owned and controlled coal mining company. (Also watch attached Creamer Media video.)

But when those four letters are absorbed into the body of Seriti they will be expanded into eleven letters that reveal the new beyond-coal and broad-based energy ambition of the company owned by four black anchor shareholders comprising Masimong Group, Thebe Investments, Zungu Investments and Community Investment Holdings.

In response to Mining Weekly on the possibility of the unlisted coal-mining company embracing general energy opportunities as others have done, Teke revealed that the SAEC nomenclature within the Seriti fold would be changed to Seriti Power to communicate a new broader energy vision in a world that is decarbonising.

On other potential diversification, he reiterated Seriti's interest in manganese and chrome. “Manganese is attractive. I’ve looked at chrome. It is attractive. If there are opportunities that arise, we are going to diversify, definitely.”

On the prospect of the company making a bid for South32’s manganese alloys plant Metalloys, in Meyerton, Gauteng, which has been placed on temporary care and maintenance, Teke smiled broadly before responding: “I’m sure you know that I started my mining career there, at Metalloys, when I joined BHP Billiton in 1999. So, it is imperative that Metalloys must be saved. If there are possibilities to save it, why not?”

Mining Weekly can report that the first job of KwaThema-born Teke, 56, was as a R76-a-week labourer at Van Leer, in Springs, in 1984.

On completion of the SAEC divestment, South32 stated in a media release that it expected to book a loss on the sale of between $125-million and $175-million, with the group’s net cash balance poised to reduce by $180-million to reflect the recognition of the vendor support package being provided to Seriti. “Notwithstanding, completion of the divestment will further strengthen our balance sheet and provide additional flexibility to the group in respect of the future allocation of capital,” South32 stated.

“When we made the decision to exit South Africa Energy Coal, we recognised the business would continue to play an important role in supplying South Africa’s energy needs for years to come. With this in mind our vision was two-fold. First, we wanted to ensure that the business would be sustainable for the long-term, for the benefit of its employees, customers and local communities. Of equal importance was our objective for it to become a black-owned and operated business, consistent  with South Africa’s transformation agenda. We believe Seriti is the right owner of South Africa Energy Coal and that the additional financial support package we have provided will underpin the future sustainability of the business.

“For South32, completion of the divestment is an important milestone that will see us significantly simplify our business, reduce our capital intensity and improve our underlying operating margins. Looking forward, we remain focussed on reshaping our portfolio with a bias to the base metals important for a low carbon future by advancing our development options in North America and continuing to invest in greenfield exploration,” South32 CEO Graham Kerr stated.

Since signing in November 2019, this transaction has been subject to various conditions precedent that have required, amongst others, the approval of the Competition Tribunal, the Minister of Mineral Resources and Energy, Richards Bay Coal Terminal and Eskom.

The transaction is expected to offer a sustainable, reliable and cost-effective coal supply solution to Eskom, and at the same time bring opportunities for further synergies and optimisation within Seriti.

Teke acknowledged the support of South32 and Eskom in achieving the fulfilment of conditions to the transaction, noting particularly the provision by South32 of a facility of up to $50-million to fund the restructure of loss-making mining areas. South32 will provide $200-million over ten years to fund SAEC’s historic environmental rehabilitation and closure liabilities. South32 will also adjust the upfront payment to a nominal amount and forgo the deferred consideration previously envisaged under the announced sale agreements.

Eskom and Seriti have also agreed to a number of proposals to improve the long-term, sustainable and cost-effective supply of coal to Eskom, including commitments for continued supply from the Kriel and New Largo mines. Seriti will also make infrastructure available to facilitate supply to Eskom’s power stations.

Eskom has agreed to amend the existing terms and conditions stipulated in the Duhva Coal Supply Agreement, which is currently loss-making, adjusting the coal price to R550/t with effect from the start of June , with an annual escalation from 1 January 2022 in line with the Producer Price Index. The agreement will run until 31 December 2024.

The Treasury has allowed Eskom to release South32 from its ten-year R280/t coal contract obligation at Duvha power station and agreed to pay Seriti R550/t and cut the contract to four years.

Seriti will be engaging with employees and unions, with community structures, with the regulator and municipal officials in the coming weeks leading up to the closure of the transaction.

Seriti Coal operates three large-scale, opencast and underground thermal coal mines, the New Vaal, New Denmark and Kriel mines, which it acquired from Anglo American, as well as various life extension coal resources and closed collieries. Together with its partners, Seriti intends to develop its New Largo project into a large-scale, opencast coal mine capable of providing the baseload fuel requirements for Kusile power station.