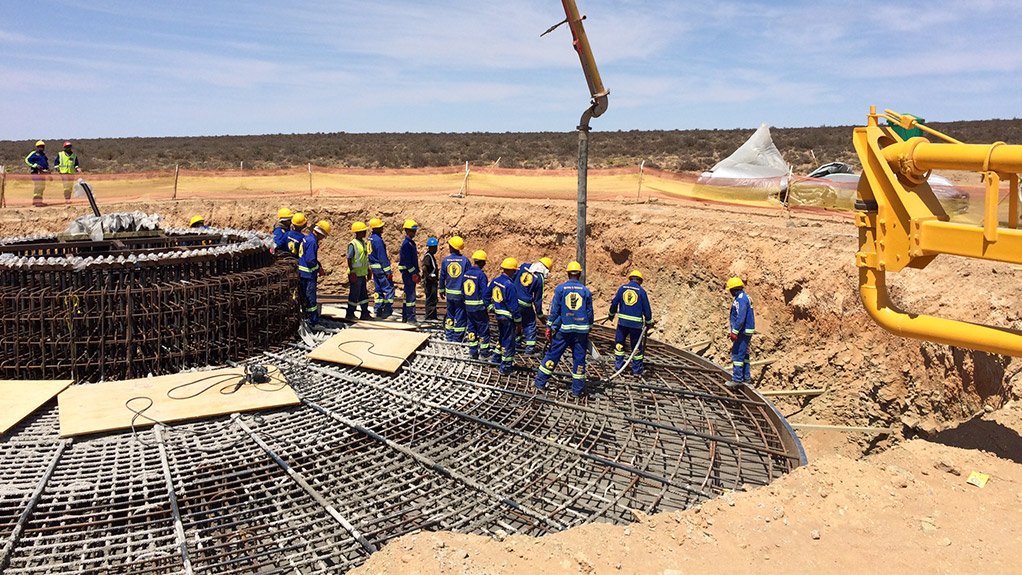 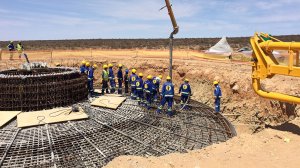 The Northern Cape’s Loeriesfontein wind farm has announced that its wind turbine foundations comprise very low quantities of Portland cement in the concrete formulation, resulting in what is believed to be one of the world’s lowest carbon footprints for any wind farm foundation, according to research scientist and head of engineering and construction services group Murray & Roberts’ Concrete Centre for Excellence, Cyril Attwell.

The first two bases, which were completed on October 13, used a concrete formulation that replaced 80% of Portland cement with ground granulated corex slag (GGCS), while the remaining foundations used a unique design comprising 35 kg of high-grade Portland cement per cubic metre – an 89% reduction in Portland cement from a standard concrete mix.

Attwell says this composition has resulted in the wind farm’s carbon footprint being reduced to about 90.7 kg of carbon dioxide (CO2) per cubic metre. GGCS, a by-product from the iron industry, was used to replace 89% of the cement.

“Cement manufacturing is typically an energy-intensive process. By substituting the cement with a by-product such as GGCS, we are able to reduce our carbon footprint considerably,” says Loeriesfontein project manager Leo Quinn.

Scientists working for Murray & Roberts have developed a technology that meets the 30 MPa standard using 25 kg of cement. Attwell boasts that this far exceeds the standard requirements.

To date, strengths of up to 52 MPa have been achieved on other sites using Murray & Roberts’ patented Advanced Recrystallisation, or ARC, technology and 0 kg of Portland cement per cubic metre.

Quinn adds that the achieved reduction in Murray & Roberts’ carbon footprint is phenomenal, especially considering that a standard 30 MPa concrete, as supplied by the ready-mix industry, equates to a carbon footprint of about 300 kg to 350 kg of CO2 per cubic metre.

Loeriesfontein wind farm is part of the Hantam municipality in the Namakwa district, and will comprise 61 wind turbines, each with an output of 140 MW. It will generate about 563 500 MWh/y of clean, renewable energy to the national grid.

The turbine components will be supplied by Siemens Wind Power (hubs and nacelles), Shanghai Electric (blades) and Atlantis Resources (towers), and will most likely be delivered to Kouga local municipality, in the Eastern Cape.

The wind farm will avoid about 550 000 t of carbon emissions each year, compared with traditional fossil fuel power plants and generate enough to power around 120 000 average South African households.

The site, which spans a total of 3 453 ha, was chosen for its excellent wind resource, favourable con- struction conditions and straightforward electrical connection into Eskom’s Helios substation.