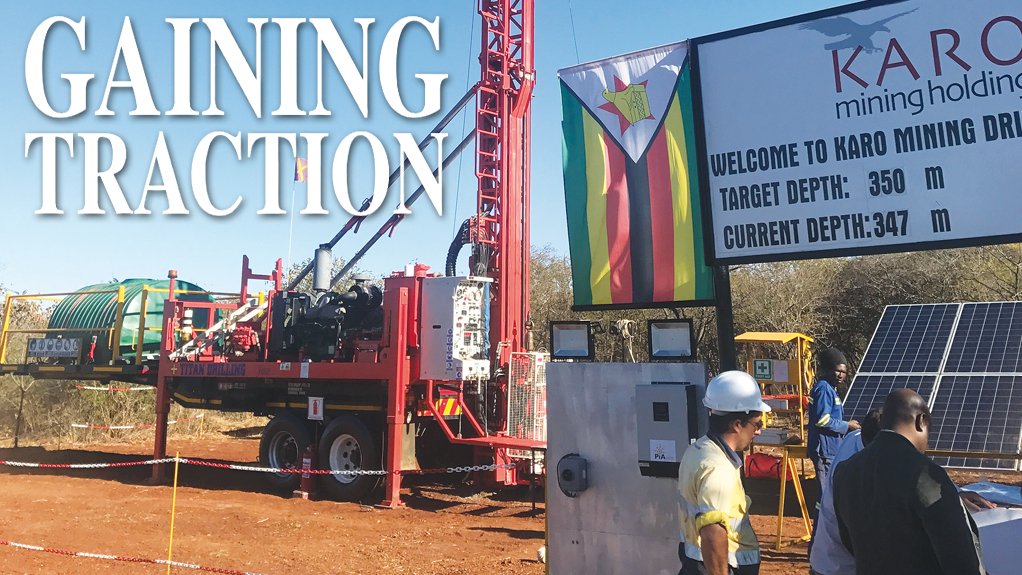 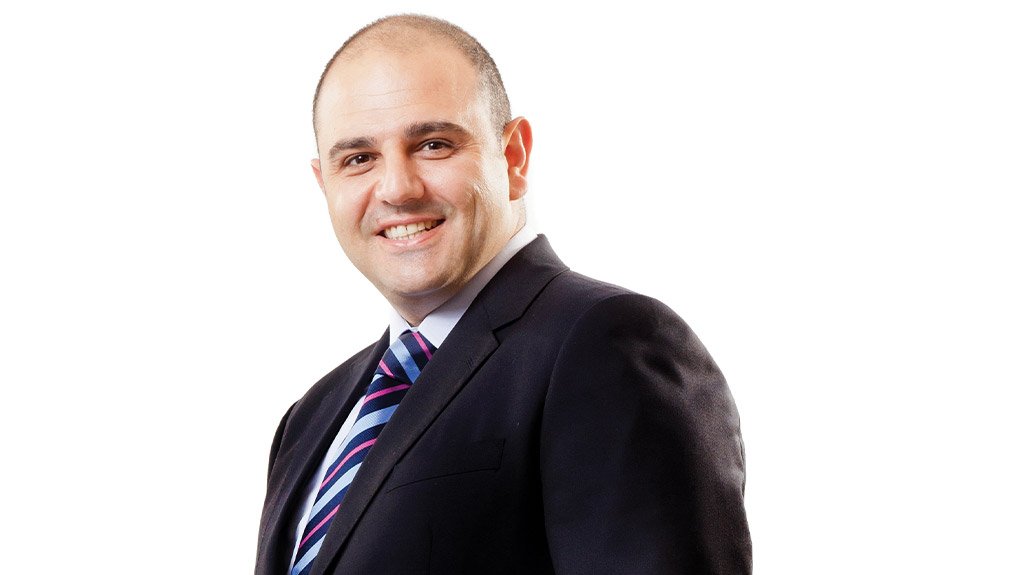 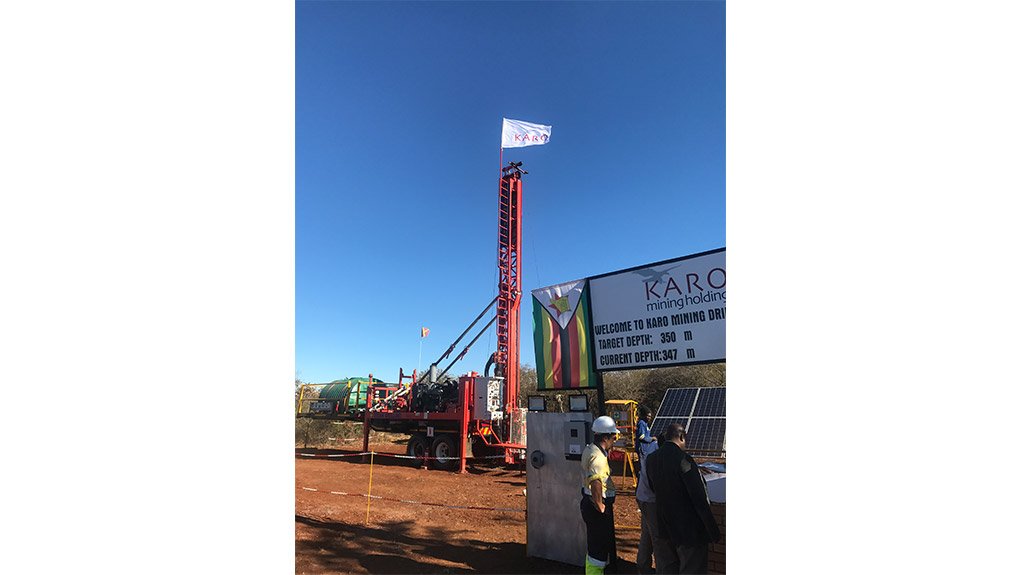 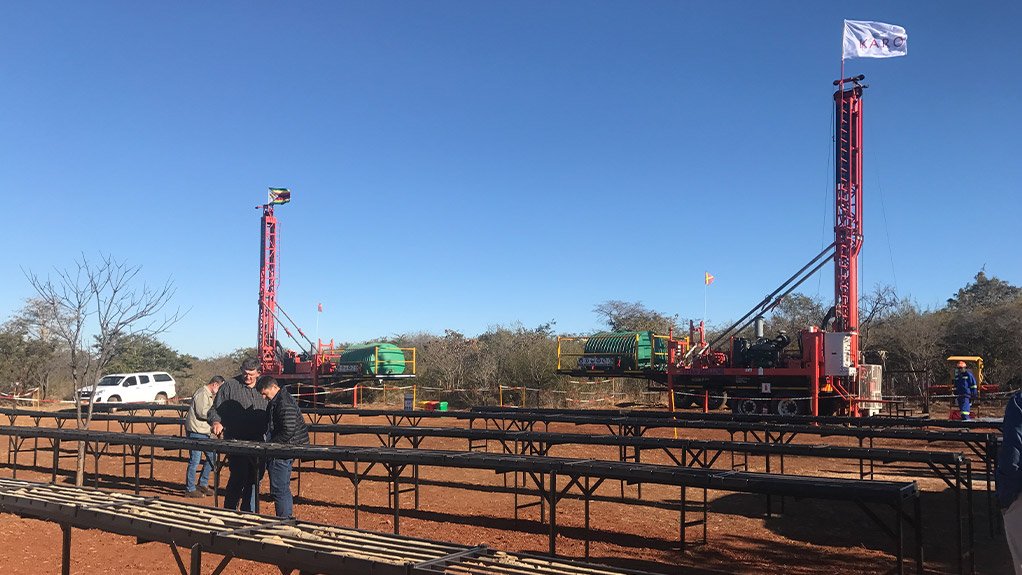 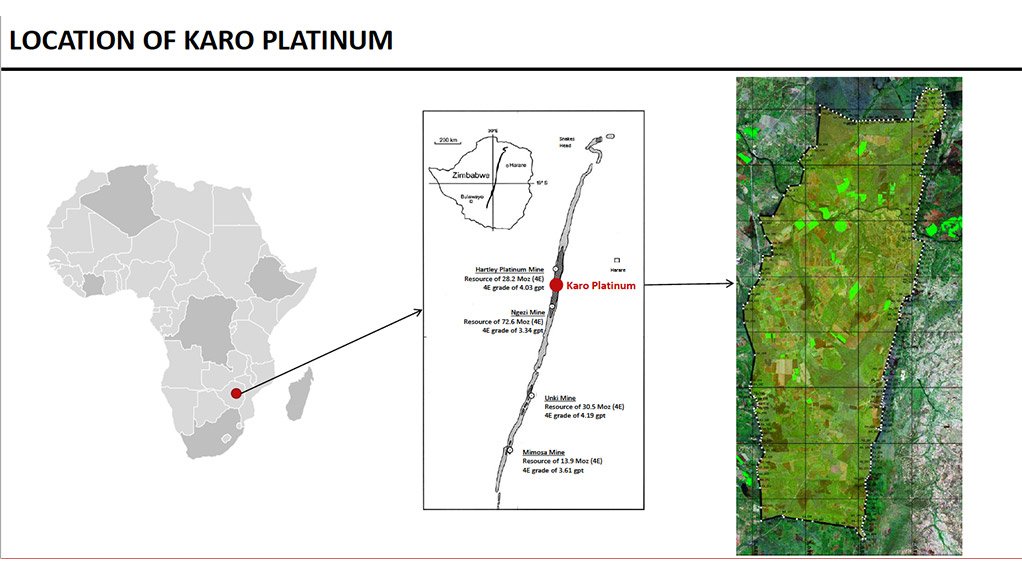 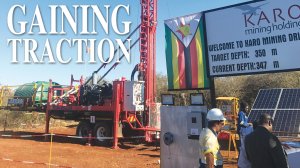 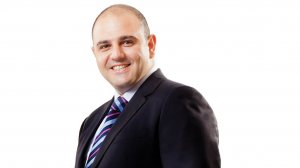 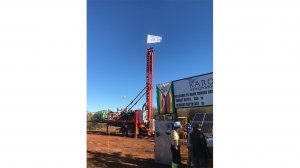 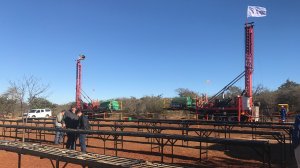 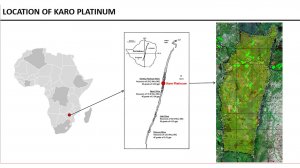 PHOEVOS POUROULIS Tharisa has agreed to provide an $8-million debt facility for the initial geological exploration programme and sampling work to confirm and delineate the orebody before progressing to the BFS
PROGRESSTo date, 72 diamond core boreholes totaling 12 000 m has been completed by the first drilling contractor to be mobilised at the site
UNCOVERING POTENTIAL The results of the assay and metallurgical testwork will form the basis of the next phase of the project
IDEAL LOCATION The project is located on Zimbabwe’s Great Dyke and is estimated to contain a potential resource of some 96-million ounces, at 3.2 g/t platinum, palladium, rhodium and gold

A year after Karo Mining signed a $4.2- billion deal to develop the latest integrated platinum mining and refining complex in Zimbabwe, 72 diamond core boreholes totalling 12 000 m have been completed by the first drilling contractor to be mobilised onto the site.

The drilling campaign is focused on the western edge of the Great Dyke, with the boreholes targeting average depths of 50 m to 150 m below the surface.

A second drilling contractor has now been mobilised on the eastern edge of the Great Dyke.

This follows the granting of a development permit by the Environmental Management Agency (EMA) during the last quarter of 2018, which enabled Karo Mining’s local subsidiary, Karo Platinum, to initiate the field work and the exploration drilling programme.

Karo Platinum, the first of four projects comprising the development of a large-scale vertically integrated PGMs mining complex, was awarded the PGMs mining right under a special grant, after Zimbabwe Platinum Mines (Zimplats) had released part of its mining lease area in support of Zimbabwe’s efforts to facilitate participation by new investors in the local platinum mining industry.

In 2014, Karo Mining, which had been seeking platinum mining and refining opportunities in Zimbabwe since 2009, responded to the Zimbabwe government’s invitation for expressions of interest in developing a PGMs refinery in the country.

Some 50% of the shareholding in Karo Platinum is held by an investment company wholly owned by the Zimbabwe govern- ment, after parent company Karo Mining and the State entered into an investment project framework agreement in March 2018. This was the culmination of four years of engagements and extensive negotiations between the parties.

The deal was considered one of the biggest in Zimbabwe’s mining industry, with the project officially launched by Karo Mining chairperson Loucas Pouroulis in August last year.

The deal will lead to the establishment of a PGMs mine, concentrators and smelters, a base metals refinery, a precious metals refinery and power generation capacity.

In June, shortly after the deal had been inked, Tharisa, led by CEO Phoevos Pouroulis, acquired 26.8% of Karo Mining for $4.5-million to secure access to the Tier 1 PGMs resource.

“Improvements on the political landscape precipitated the move by Tharisa to explore geographic diversification opportunities in Zimbabwe, renowned for having the world’s largest PGM deposits outside South Africa,” Pouroulis said at the time.

A farm-in approach – which Tharisa has adopted – reduces the group’s upfront exposure and offers the option of an increased stake in the future, with the low-risk entry through Karo Mining providing a platform for a measured, staged approach to investment in Zimbabwe.

The project, located in Mashonaland West province, south of Zimplats’ Hartley platinum mine and Selous metallurgical complex and north of the Ngezi mine, is estimated to host a potential resource of some 96-million ounces at 3.2 g/t on a platinum, palladium, rhodium and gold – or four elements – basis.

The Great Dyke, which contains signifi- cant quantities of chromite and PGMs, is about 550 km long and up to 11 km wide, transecting Zimbabwe in a north-north- easterly direction.

The PGMs resources of the renowned geological feature, to a depth of 350 m, are said estimated at more than 2 000-million tonnes.

Karo Platinum’s conceptual designs for the mining of its portion of the Great Dyke are based on four openpit mining operations, the first of which is expected to begin operations in 2020. The second is expected to follow suit in 2021, with the third and fourth coming on stream in 2022 and 2023.

At steady state, the platinum mining complex will produce 1.4-million ounces of refined PGMs and an estimated 14.4-million tonnes of run-of-mine ore each year.

Karo Refining will treat up to two-million ounces of PGMs a year, providing an additional 600 000 oz capacity for toll refining by other PGMs producers in the country.

Karo Mining has said it will apply for National Project Status and for the planned projects to be located in a special economic zone, which will enhance its economics through concessions granted by the Zimbabwe government.

It is estimated that the project could generate up to 15 000 direct and 75 000 indirect jobs across the value chain.

Karo Mining will be responsible for opencast and underground mining at the platinum concession, while Tharisa will manage exploration and oversee the subsequent bankable feasibility study (BFS), which is scheduled to get under way this year.

Tharisa has agreed to provide a $8-million debt facility for the initial geological exploration programme and sampling work to confirm and delineate the orebody before progressing to the BFS.

Meanwhile, an environmental consultant has been appointed, following the EMA’s approval of Karo’s environmental prospectus, with the necessary baseline studies and stakeholder consultations having been concluded.

The final environmental-impact assessment (EIA) and management programme is currently being prepared for submission to the EMA for approval.

The project’s digital terrain mapping and high-resolution airborne geophysical survey have been completed, while the geophysical data has also been interpreted.

Further, the cores from the boreholes are being prepared and logged prior to being sent to an independent laboratory for assaying.

The results of the assay and metallurgical testwork will form the basis of the next phase of the project.

The next stage of development will include the continuation of the drilling programme, the resource estimation and feasibility studies for the mine design, infrastructure and bene- ficiation plants.

Alongside the drilling programme, Karo Platinum is undertaking the quality-assurance and quality-control programme.

Tharisa’s option to participate in other downstream projects, at a later stage, through discounted farm-in arrangements, will result in a play into power.

The project envisages the establishment of a 300 MW solar power plant in and around the Karo platinum project area by the power generation unit, Karo Power Generation.

The current energy generation base in Zimbabwe is dominated by coal and hydropower, as the vast renewable- energy sources available are not yet fully developed.

However, Zimbabwe aims to increase the renewable-energy supply to the national grid, in line with the country’s integrated energy resource plan.

As it will not be possible to feed all 300 MW of solar-generated power through a single substation into the national grid, the Zimbabwe Electricity Transmission & Distribution Company (ZETDC) and Karo Power have identified five sites that will receive the solar-generated power in 50 MW modules.

The ZETDC has commissioned the required grid-impact studies for the selected sites, while Karo Power has appointed a technical consultant to conduct the feasibility studies and an environmental consultant to submit the environmental prospectus to the EMA and complete the EIAs on all five sites.

The first site, near the Karo platinum project, will receive the first 100 MW in two modules.

Karo Power has had initial engagements with the Zimbabwe Energy Regulator concerning a power purchase agreement, with substantive negotiations set to begin this month.

Once the negotiations have been finalised, Karo Power can apply for an independent power producer licence.