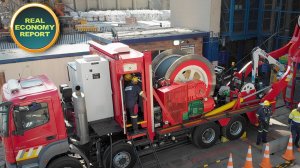 Nonprofit organisation Mines Rescue Services on January 21 carried out testwork on a world-first mobile rescue winder that can go down to 3 000 m underground. Marleny Arnoldi attended the testing at Gold Fields’ South Deep mine, in Gauteng.

The rescue winder, which was manufactured by Tech Edge Group’s Winches and Winders, will be stationed in Carletonville and will be deployed when the need arises at any of the deep gold mines in the region.

These winders are typically needed when there has been an incident at a mine and the normal conveyances cannot be used to get to the scene.

It can carry up to six people at a time, as well as equipment and medical supplies.

MRS CEO Mannas Fourie tells us more about the development and testing of the winder.

Previously, rescue winders could only reach depths of 1 200 m, which was insufficient for South Africa with it having some of the deepest mines in the world.

Winches and Winders chairperson Russell Moore told Mining Weekly in a separate interview that the catalyst for the design of this innovative equipment was the cave-in accident at the San Jose gold mine in Chile, in 2010, which left 33 people trapped 700 m underground for weeks.

Moore explained that the company wanted to design a mobile, self-contained rescue winder to address the need for rapid response, deployment and resolution of underground mining emergencies.

He added that a novel feature of the winder is its sheave wheel deployment system, which ensures that no additional headgear or on-site rigging is required during a rescue operation, saving valuable hours.

Gold Fields executive VP Martin Preece discusses what this piece of equipment means for the industry.