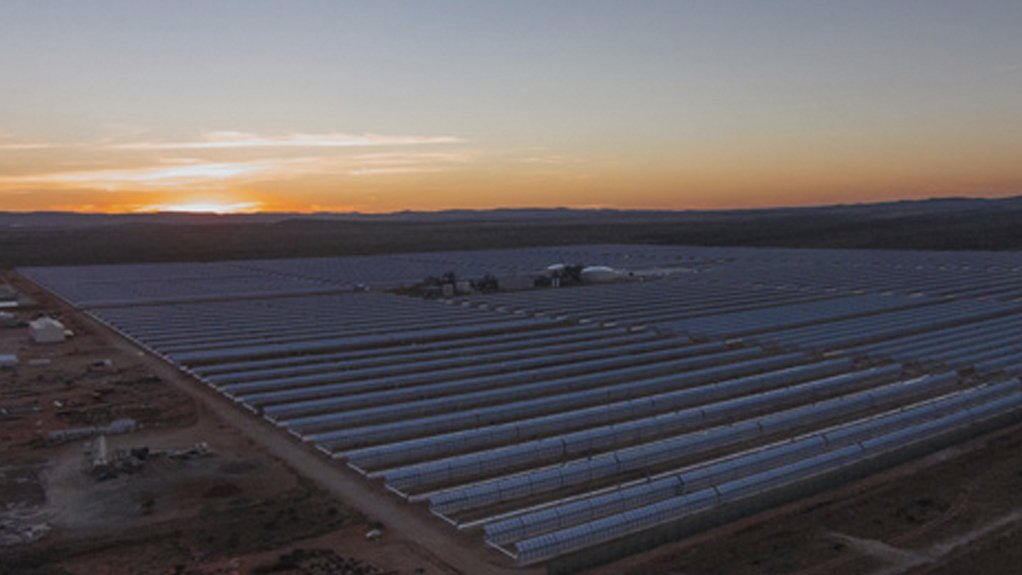 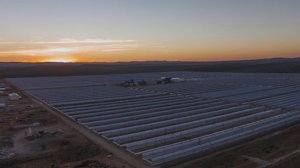 The Bokpoort concentrated solar power (CSP) project – launched March 14 – in the Northern Cape, is one of the few CSP projects that use heat exchangers as a diffusion medium for the energy stored inside the molten salt.

The R5-billion project has one of the highest solar radiation footprints in the world and is being developed as part of South Africa’s Renewable Energy Independent Power Producer Procurement Programme.

The heated oil is pumped to the heat exchangers, which transfer the thermal energy to heat water. The generated steam is then used to drive a SST-800 Siemens steam turbine generators to produce electricity.

A stream of the same HTF is also used to heat a molten salt mixture stored in two large insulated tanks, which retain the heat and release it during the night or during cloudy days. Following the transfer of the heat, the HTF is further cooled and recirculated through the receivers to repeat the process.

The project will also involve the installation of a backup diesel-fired boiler to enable the direct heating of HTF to prevent the crystallisation of the molten salt during cold nights.

The required water for the project will be sourced from the Orange river through a dedicated water transmission pipeline.

Furthermore, the renewable-energy facility will have an output capacity of 200 GWh/y, which is sufficient to serve about 21 000 households and offset 230 000 t/y of carbon emissions.

Other significant benefits from the CSP project include the generation of about 900 jobs during the peak construction phase, 60 jobs during the operations and maintenance (O&M) phase, and about $2-million in additional investments each year.

Meanwhile, Trade Ministers from South Africa and Saudi Arabia jointly inaugurated the Bokpoort CSP project, which has been developed by research and investment company ACWA Power.

O&M provider Nomac, a subsidiary of ACWA Power, and Invest In Africa Energy Services will be responsible for providing operations and maintenance services for the facility.

ACWA Power Southern A frica region MD Chris Ehlers says: “We are here to serve the nation and to contribute to its development. “Our commitment to the development of the South African economy beyond reliably supplying renewable energy at a cost-competitive tariff is demonstrated by the R2-billion worth of locally sourced components made in South Africa that have been used in the construction of this plant and the creation of 1 300 construction jobs.”

Moreover, the Bokpoort CSP plant is the first in a series of investments in the power sector that ACWA Power is making in South Africa. The company is expecting to commence construction on the 100 MW Redstone CSP project, in Northern Cape. This is scheduled to commence in 2018.

ACWA Power is awaiting the outcome of tender submissions for a 300 MW coal-fired plant in Mpumalanga and another 150 MW CSP plant, in the Northern Cape.

ACWA Power pursues a mission to reliably deliver electricity and desalinated water at the lowest possible cost, while seeking to maximise local content and local employment creation, thereby contributing to the social and economic development of the communities and countries it invests in and serves.

Speaking at the launch, Davies said the Bokpoort project was the largest investment by Saudi Arabia research and investment company ACWA Power and needs to be celebrated as it instils confidence in government’s long-term infrastructure rollout and also strengthens relations between the two countries.

“This project has a major socioeconomic development impact for the Northern Cape and South Africa. Through the bid window process the overall prices of energy have become very competitive. The design of the Renewable Energy Independent Power Producers Procurement Program (REIPPP) is intended to leverage the investment in the energy sector to contribute to industrialization of the local economy,” said Davies.

He said during construction, the Bokpoort project spent over R2.4-billion on local content, 40% of it being sourced and manufactured locally.

These, among others, included manufacturing and assembly of solar field collector steel structures, manufacturing, site erection, installation and testing of a relevant number of water storage reservoirs, heat exchangers and tanks for molten salt.

Davies congratulated ACWA Power chairperson Mohamed Abunayyan for the vision, foresight and confidence in investing in South Africa as an attractive investment destination.

ACWA Power is aiming to expand its Southern African portfolio to 5 000 MW by 2025. The group has identified South Africa, Namibia, Mozambique and Botswana as key growth markets in the region.

The company is currently pursuing an active regional pipeline of 1 000 MW, representing a combined investment value of approximately R60-billion. “We also look forward to ACWA Power’s launch of the 100 MW Redstone Concentrated Power project, also here in the Northern Cape as well as the development of a 450 MW coal fired plant,” added Davies.

Speaking at the same event, Al Rabiah said key in the CSP project is the community of the Northern Cape that had a great role in the reception of the model of the solar plant.

He said with great investments over the last two and a half years in community improvements such as training, development and education, not only does the plant utilise local products it has also created jobs for the coming 20 years of operations of which all will be sourced from local talents.