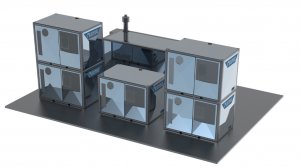 In 2018, Mitochondria entered into a relationship with powertrain solutions developer AVL Engineering to develop Mitochondria’s own fuel cell – a project known as Project Phoenix.

As part of Project Phoenix, Mitochondria’s plans involve developing manufacturing capacity to build units totalling 250 MW a year, with plans to eventually ramp up to 1 000 MW a year, dependent on demand at the time.

As part of these plans, Mitochondria is in discussions with UK-based partner fuel cell technology and engineering company Ceres Power to manufacture the fuel cell stacks in South Africa.

Mitochondria is also talking to Centurion-based project management and engineering company Ario Engineering about producing the direct current to direct current inverters the fuel cells will need to produce electricity.

At 250 MW a year, the facility will directly employ 400 people, while 800 will be employed if and when the company reaches the 1 000 MWa year capacity, Mitochondria founder Mashudu Ramano tells Engineering News.

In April, Mitochondria hosted a localisation workshop in the Sebokeng area, near the Vaal SEZ, to mobilise local participation in the company’s supply chain. About 300 people attended the workshop.

As the company gears up to roll out fuel cell plants in South Africa, it is planning to release to market primarily 50 kW units, with a keen interest in providing 250 kW units comprising five 50 kW plants to users that require the general industrial ballpark of about 250 kW of power.

“We looked at systems that were in the market, most [being] 5 kW systems. We did a market study to determine the optimal size that we can introduce into the South African market to meet the challenges we have. That study [pointed to] a 50 kW module, which we can scale up,” he says.

A 50 kW module will be able to run a “sizeable building” of about three to four storeys, says Ramano. “Industrial scale [applications, such as] a hotel or factory, will require something bigger. [Therefore, what Mitochondria is] introducing is an alternative to Eskom.”

Once units start rolling off the production line, Mitochondria is aiming to get them into factories and offices in the Vaal SEZ, as well as Gauteng provincial government buildings and local municipalities.

Mitochondria’s funding partners for Project Phoenix include the Industrial Development Corporation, the Development Bank of Southern Africa and the Department of Trade, Industry and Competition.

On an aside, in 2015, Mitochondria installed a 100 kW platinum-based hydrogen fuel cell at the then Chamber of Mines – now Minerals Council South Africa – building in the Johannesburg central business district as a proof of concept and to meet the baseload demands of the building.