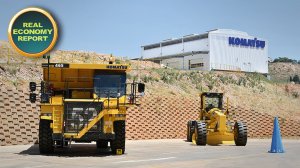 Komatsu Africa Holdings in November opened a new industrial hub, built to the tune of R985-million, in Germiston, in Johannesburg. Tasneem Bulbulia reports.

The 300 000 m2 development is one of the largest industrial campuses in the country and will serve as the central hub from which the company will manage its widespread operational footprint across South and Southern Africa.

It was officially unveiled at a ceremony attended by local and international Komatsu stakeholders, and Japanese and South African government entities.

Komatsu Limited CEO and president Tetsuji Ohashi was present in South Africa for the unveiling, and emphasised the importance of the region to the group.

Minister of Trade and Industry Dr Rob Davies also gave his thoughts at the unveiling: