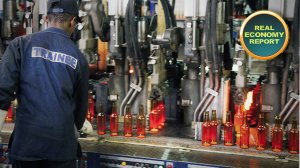 Sashnee Moodley:
Packaging company Nampak invited media to its glass manufacturing facility earlier this month to highlight its improved operational efficiencies, which has taken its glass business from red to black in recent months.
David Oliveira tells us more.

Nampak CEO André de Ruyter told media at a visit of the company’s glass manufacturing facilities in Germiston that the glass division had been losing money following the commissioning of the third furnace in 2014, prompting Nampak to overhauling significant elements of the operation, including the divisional leadership team.

David Oliveira:
He added that through a number of initiatives aimed at improving operational efficiencies the division has reduced its monthly glass manufacturing breakeven point materially depending on the product mix and campaign build parameters

The new furnace was commissioned in late 2014, which Van den Berg highlights was a trying time for the division owing to manufacturing disruptions.

Gob refers to the molten glass before it is formed into a glass product.

David Oliveira:
The strategies employed by the company have significantly improved its pack to melt (PTM) rate from record lows of between 40% and 50% in 2014 to exceeding 85% currently.

De Ruyter noted that the company was able to make the turn to profitability by focusing on the right strategies and manufacturing philosophy, focusing on operational excellence, safety and discipline.