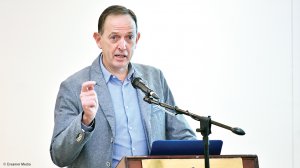 Describing 2020 as “a year of great trauma and hardship for people the world over”, branded automotive, industrial and electronic consumables product importer and distributor Hudaco’s headline earnings a share for the 2020 financial year, ended November 30, were down by 22.5% to R10.50, while comparable earnings a share were down 35.5% year-on-year to R8.

However, R908-million in cash was generated from operations and borrowings declined by R365-million over the year. Turnover was, overall, down by 6.7% to R6.3-billion while operating profits decreased by 27.2% to R510-million.

The company highlighted that its operating profit to May 2020, had been only R79-million, after increasing expected credit losses and writing down certain inventory in the expectation of write-offs owing to the pandemic.

Goodwill and other intangibles were impaired by R348-million, resulting in a loss for that period. These impairments, required in terms of the International Financial Reporting Standards (IFRS), were based on judgment exercised while the country was in the midst of the first wave of Covid-19.

Throughout the 2020 financial year, apart from the spread of the Covid-19 virus and subsequent lockdowns, South Africa was also faced with Stage 6 load-shedding in December 2019, which was the first month of the financial year, and a ratings downgrade on government  debt to junk status by ratings agency Moody’s.

Hudaco used the extended lockdown in the first half of the financial period to identify opportunities to achieve long-term savings and synergies through rationalisation of elements of certain businesses whose cost structures were expected to be out of line with future sales levels.

Most of these opportunities were found in the security and communication, hydraulics and pneumatics and electrical power transmission businesses. Throughout the second half of the year, all of Hudaco’s businesses and the majority of its customers were able to operate, albeit initially at reduced capacity.

Considering the year as a whole, Hudaco CEO Graham Dunford said the company’s market sector analysis “reflected very little change”, in the various segments the company serves, from the prior year.

He highlighted the importance of planning and strategizing, managing working capital, and cost containment done over periods such as the lockdown months, which Dunford said enabled the company to optimise the group's performance from the outset.

Despite the negative sentiment and lack of business confidence, both of Hudaco’s business segments very quickly got back up to 2019 turnover levels.

The increasing difficulty in getting goods through South African ports had a significant impact on Hudaco’s supply chain, which Dunford said led to stock shortages and had a negative effect on turnover and operating profits.

“Although there was a general shortage of containers available on the world market, finding space on ships that would stop in South Africa’s ports was a big challenge. Durban, in particular, is now regarded worldwide as notoriously inefficient, with ships sometimes having to wait for longer periods idle offshore before being granted a berth.”

He lamented that there are then delays in offloading and transporting containers inland, which results in further costs being incurred.

“It is of concern that if the inefficiencies at our ports remain unresolved, South Africa could be marked as an undesirable export destination for suppliers and result in our having to carry more inventory.”

Further, “while always solid”, Hudaco’s financial position has strengthened with R908-million in cash generated by operations in 2020. The group had R643-million in net bank borrowings at year-end, down R365-million from R1-billion in 2019, after spending R82-million on repurchasing shares.

Interest payments were also covered more than seven times by operating profits, compared with the company’s internal benchmark of at least five times.

“We still have significant additional bank borrowing facilities available, so if suitable acquisition opportunities are identified, we have the capacity to fund them,” said Dunford.

At the beginning of 2019, Hudaco committed to reducing inventory levels and have done so by a further R122-million on top of R102-million achieved that year.

The consumer-related products segment now comprises eleven businesses, and in 2020, made up 54% of Hudaco’s sales and 67% of operating profit.

In 2019, this segment contributed 60% of group operating profit.

MiRO had a very good second half, with increased demand for wireless and fibre home connectivity, video conferencing, touchless access control and network upgrades for Internet service providers and enterprises.

The battery businesses supplying products to the automotive wholesale and retail sectors; as well as those in the energy storage market, such as stand-by battery systems for support infrastructure to the UPS market, telecommunication, security (alarm) and solar markets, project orders within the data centre sector, together with replacement batteries for load-shedding standby applications, both did “very well”.

Eighteen businesses that now constitute engineering consumables made up the other 46% of sales and 33% of operating profit.

The expense base in engineering consumables is much higher because of its extensive branch network and the number of separate businesses in that segment, so the negative effect of reduced sales on its profitability was greater, Dunford commented.

He noted that demand in the second half was “surprisingly strong” in this segment with all businesses very quickly getting back to 2019 levels.

Ambro Steel and Bearings International in particular had a good second half, compared to consolidations in the hydraulics cluster with Dosco, Ernest Lowe and HERS.

Bauer, Powermite, Ampco, Three-D Agencies and Varispeed are to be consolidated into one electrical cluster in March 2021.

In the second half of the year, engineering consumables turnover was up 3.5% with operating profit up 12.6%. Operating margin increased from 10.6% to 11.5%.

The company considers prospects for Hudaco to be positive for 2021, despite what is happening in the economy.

“While we appreciate there is much uncertainty ahead, our businesses are well placed and ready for 2021, subject to no further lockdown restrictions on businesses in the markets we serve.”

The company said it should also see the benefit of the rightsizing and rationalisation within certain businesses coming through in 2021.

“We are confident that we will benefit immediately from any increase in business confidence and growth in gross domestic product.”

In the interim, however, Hudaco will continue to seek opportunities to improve efficiencies and synergies in its businesses where it makes sense, manage the elements within its control and use the cash generated to either pay down debt or make accretive acquisitions, potentially including of the company’s own shares.