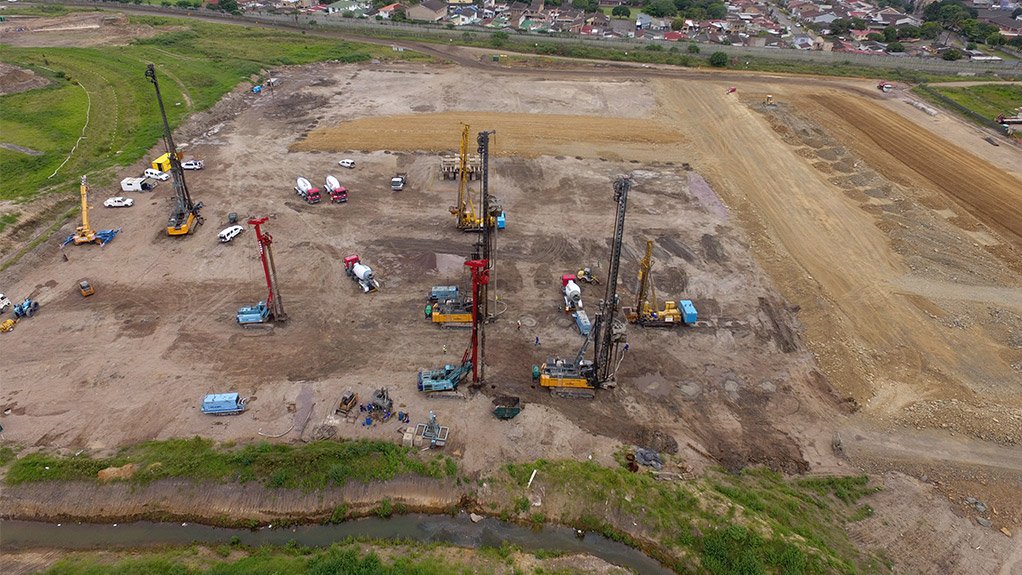 Franki Africa was awarded the contract for the ground improvement works on the project in November 2016.

The three-year project involves the construction of warehouses and a distribution centre near the new proposed dig-out port at the old international airport, in Durban. It is scheduled for completion in December 2019 and is currently about 30% complete.

The project, which is being built on Durban’s 91-year-old Clairwood racecourse site, will meet the growing demand for A-grade logistics and distribution facilities in the south of Durban.

“The project has been challenging, as the ground conditions consist of compressible silt clay, which required the company to consider an alternative to conventional piling methods for the warehouses.”

Instead of opting for using more expensive piling methods to counter the undesired ground conditions, the company – in collaboration with Keller Group – implemented a ground improvement solution, which combines Rigid Inclusions and Stone Column Heads known as CMM.

“Being such a large-scale project, Franki Africa purchased new rigs – three Liebherr LRB 255 and one Liebherr LRB 355 –equipped with ring vibrators, to install the columns to a depth of up to 38 m below the platform level,” Ferreira says.

Meanwhile, Franki Africa is installing piling for the 70-floor mixed-use Pinnacle Towers development in Nairobi, Kenya, which, at 300 m, is expected to be the tallest building in Africa once completed.

The main contractor is China State Construction Engineering Corporation, which also built the African Union headquarters, in Ethiopia, and the Beijing National Aquatics Centre, which was used during the 2008 Olympics, in China.

Initially, the company was awarded the contract to provide lateral support for the excavation, but was subsequently awarded the piling contract, which entails the installation of 378 cast-in-situ piles. Ferreira says that the project started in November last year and that about 20% of the job has been completed.

The company is drilling through hard-rock ground conditions using cluster hammers. “Normally, there are soft ground conditions going into harder rock conditions but, in this case, it is necessary to penetrate hard rock before a softer layer is encountered,” he says, adding that the developers were concerned about settlement occurring if the piles were founded in or above the soft layer.