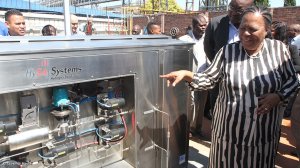 SPRINGS (miningweekly.com) – The South African government is intent on creating incentives for mines to derive greater benefit from investing in platinum fuel-cell technology.

Science and Technology Minister Naledi Pandor, who spoke at the launch by Impala Platinum (Implats) of a fuel cell forklift and hydrogen refuelling station at its platinum and base metals refinery in Springs, said her Department of Science and Technology intended to assist the Department of Mineral Resources in determining legitimate research and development (R&D) spend in accordance with the Treasury R&D tax incentive.

“We want to create incentives that will support the mining sector to derive greater benefit from investing in platinum fuel-cell technology,” she told those attending the Implats launch.

In view of South Africa’s comparative advantage of access to platinum, providing an edge over the competition, the Minister expressed the hope that the agreements developed with industry and other government departments would give the country the boost it needed to become a world leader in platinum-using fuel cell and hydrogen technologies.

She noted that Implats had not applied for its tax incentive and urged the company to consider doing so.

“We’re trying to encourage more and more of the private sector to confirm through such application that they are indeed investing in innovation,” Pandor said, adding that South Africa spent some R1-billion a year on energy R&D, amounting to just under 4% of gross R&D expenditure.

It was in the ambit of hydrogen fuel-cell development that some of the most pioneering work was happening, which could result in South Africa becoming a world leader in the provision of the clean fuel of the future.

The abundance of platinum in South Africa together with capable researchers at centres of competence placed the country in a strong position to seize the opportunities offered by a future hydrogen-based economy.

“And that’s what we are talking about. It’s not just about a hydrogen fuel cell. It’s about an economic development that all of us would want to see,” she said.

The hydrogen fuel cell components being developed by the State-backed Hydrogen South Africa (HySA) centres of competence could be used for portable power applications to provide quieter and cleaner alternative sources of energy and a combined heat and power application to supply power and heating for domestic and commercial use.

In order to promote further deployment of the technology, particularly in the lucrative automotive sector, South Africa needed public-private partnerships so that the country could develop the requisite infrastructure.

The alignment of fuel cell initiatives across government was critical in the stimulation of private sector funding that was necessary to create a viable hydrogen and fuel cell technology industry cluster.

To this end, the government was working on a fuel cell and hydrogen roadmap, as had already been done in Japan, which had the vision of becoming a carbon neutral hydrogen fuel society by 2040.

She noted growing political will to develop commercial scale hydrogen infrastructure in Japan and South Africa would have to address the issue of hydrogen distribution from highly dispersed sources of production as one of the bigger challenges of developing a hydrogen economy.

Overall, though, both the fuel cell and hydrogen industries were set for future growth owing to the renewed global commitment to control emissions, achieve energy efficiency and improve water use.

HySA had managed to secure many collaborative agreements with leaders in hydrogen and fuel cell technology in several countries and Pandor herself accompanied Deputy President Cyril Ramaphosa to Japan in August, where she attended the Japan South Africa hydrogen and fuel cell symposium, together with HySA directors and officials from the departments of Energy and Trade and Industry.

The idea had now emerged for the building of a high-temperature solar demonstration plant for hydrogen production in South Africa, with the help of Japan.

"We believe it's a project that has much merit and one that we think we can implement in just a few years and South Africa and Japan are already working on this," the Minister added.

The ultimate aim of the development was to take the entire site off grid and use only fuel cell technologies to power the company’s platinum and base metals refineries complex in Springs.

A phased approach was assisting with the development of a local supply chain, which then had the time to build capacity incrementally so that all stakeholders went through a learning curve together.

Funding was through a long-term power purchase agreement, which was based on a sound financial model that indicated a reduction in energy costs over the life of the fuel cell.

The refinery complex had supporting infrastructure for use not only by the demonstration facilities installed but also to support local manufacturing adjacent to Implats’ Springs facilities, to which the company could pipe hydrogen and natural gas as fuel sources, nitrogen for safety, and steam.

Pandor commented to SABC TV in an interview that the Department of Trade and Industry needed to confirm that the country was going to establish a platinum-based special economic zone (SEZ), where all knowledge could be brought into play.

She wanted to see fuel cell golf carts, cars, air conditioners, houses and manufacturing plant, along with investment by venture capitalists in an SEZ established with proper incentives for a fuel cell industry.