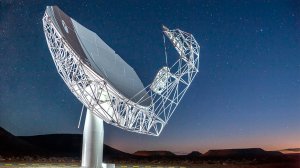 Germany’s Max-Planck-Society (MPG) and the Max-Planck-Institute for Radio Astronomy (MPlfR) are investing €11-million (about R150-million) into South Africa’s MeerKAT radio telescope array programme, it was announced on Tuesday. The money will be used to design, build and install S-band radio wave receivers on MeerKAT’s dishes. (The S-band covers radio frequencies between 2 GHz and 4 GHz.)

The German receivers will be mainly used to study pulsars. These are rapidly spinning neutron stars which emit incredibly regular radio pulses. They can thus be used as very accurate clocks to test extreme physics. The South African receivers will operate in the L-band (1 GHz to 2 GHz) and in the UHF-band (ultra high frequency: 580 MHz to 1.05 GHz).

Announcing the investment for the MeerKAT receivers, MPG president Martin Stratmann observed that “[w]e consider MeerKAT to be an important undertaking as it is not only a pre-eminent astronomy project, but also a lighthouse project for science in Africa in general. The MPG is very pleased to enable close collaboration between its scientists and the South African community and looks forward to see MeerKAT’s first glimpse of the universe with the receivers of the MPlfR.”

“MeerKAT is already acclaimed internationally as a world-class instrument – thanks to our partnership with Max Planck, MeerKAT’s ability to perform transformational science for the benefit of global knowledge production will be considerably boosted,” stated South African Science and Technology Minister Naledi Pandor, welcoming the MPG’s decision to invest in the array. “Awaiting the start of construction of the SKA, South Africa and our international partners, such as Max Planck, continue to set the pace for global radio astronomy.”