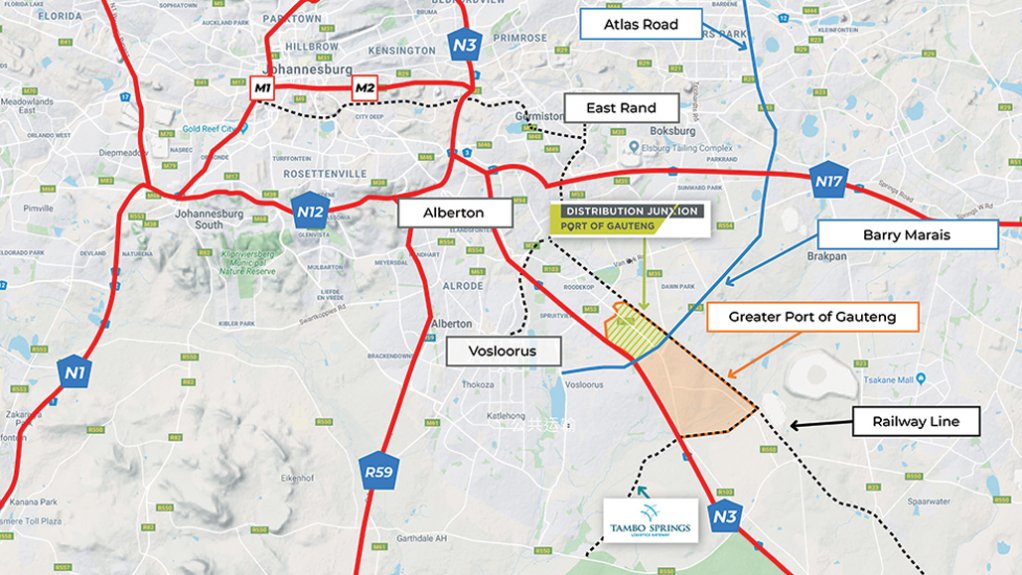 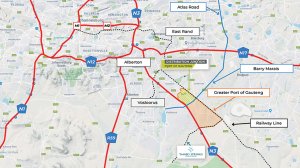 Map showing the location of Distribution Junxion Port of Gauteng and Tambo-Springs Logistics Gateway in relation to the road and rail networks in the region.

The developer of a private inland port in southern Gauteng, known as Distribution Junxion Port of Gauteng, has initiated legal action against the provincial administration in a bid to prevent it from implementing road infrastructure developments required to facilitate the construction of a competitor public–private partnership inland port, known as the Tambo-Springs Logistics Gateway.

Both proposed developments are located within close proximity to the main freight corridor between Durban and Johannesburg, including the N3 highway and Transnet’s Natcor railway line, and are being proposed as a way of improving freight logistics in Gauteng and reducing road congestion in and around Johannesburg.

In its applications, NT55 Investments is challenging the PWV13 realignment, Gazetted in 2017, on irrationality and procedural grounds. The realignment is necessary for Tambo-Springs to have its township approval Gazetted.

It is also seeking to interdict construction of the K148 and the N3 interchange, on the basis of its application to have the environmental impact authorisation (EIA) set aside for various procedural reasons.

Moreover, he labels the PWV13 provisional design as “fatally flawed”, highlighting that it poses a serious flooding risk for thousands of households in a portion of Vosloorus, in Ekurhuleni.

In court documents, NT55 Investments argues that the route realignments and the preliminary design ignore protected wetlands and floodplains, which would disqualify them from environmental authorisation.

The founding affidavit applying to set aside the K148 road and N3 interchange highlights various shortcomings in the public participation process undertaken ahead of the EIA approval, including a failure by Gautrans and the Gauteng Department of Agriculture and Rural Development to obtain comment from the owners of two Total fuel stations located alongside the N3 that would be directly affected by the road developments.

Nortje says the EIA also did not take into consideration the Transnet Petroleum Pipeline, while the supporting wetland delineation report is “totally flawed”.

NT55 Investments has since also become aware of conflicting information contained in the environmental authorisation for Tambo-Springs, which stipulates a 30 m buffer zone around a protected wetland, and the K146 realignment plan, which traverses a sensitive wetland.

It will, thus, approach the Gauteng High Court for permission to be allowed to supplement its affidavit submitted earlier this year, ahead of the Covid-19 lockdown.

The objective of the interdict, Nortje confirms, is to prevent the province from commencing or continuing with the road construction aimed at facilitating the development of Tambo-Springs, which is supported by State-owned logistics group Transnet.

The court application coincides with the recent collapse of a concession agreement, involving a Southern Palace-led consortium, for the construction of an intermodal rail terminal at Tambo-Springs.

Tambo Springs Development Company CEO Tumi Mohulatsi insists that the failure has not put paid to the Tambo-Springs Logistics Gateway project and has asserted that construction of the new N3 interchange and K148 road infrastructure will start this year.

Nortje strongly disputes that the K148 road construction can start before the environmental issues have been resolved and even questions whether these can be resolved.

Likewise, he states that no construction at Tambo-Springs can proceed before the resettlement of about 200 farm workers currently located on the Tamboekiesfontein farm, as this is a precondition for the commencement of construction.

NT55 Investments is, in parallel, proceeding with its promotion of Distribution Junxion Port of Gauteng, which was launched in October 2019.

The site, Nortje asserts, is not only well situated relative to the N3 and the existing rail network, but faces none of the environmental issues associated with the Tambo-Springs site, and consists of extremely flat land that makes the construction of large warehouses economical.

He also warns that the environmental and resettlement problems brought to light by the PWV13 and the K148 roads are likely to be replicated across Gauteng’s other provincial road projects.

This assessment is based on the fact that much of the initial planning was conducted by the Transvaal Provincial Administration, which had none of the environmental and human settlement constraints that have emerged during the democratic era.

“Conditions have changed dramatically. Informal human settlements have encroached on road servitudes, which is going to make it either impossible or very expensive to develop the road networks currently envisaged. In addition, environmental regulations make it very difficult to build new roads in wetlands, floodplains, or where flora and fauna has been identified as sensitive.”

Nortje believes these realities – together with the collapse of the passenger and freight road-to-rail vision on which the province’s 25-year Integrated Transport Master Plan is premised – will require Gauteng to review its current transport framework and overhaul the freight logistical plan, in particular.

“If they don’t, residents are in for what can only be described as a traffic attack,” he cautions.