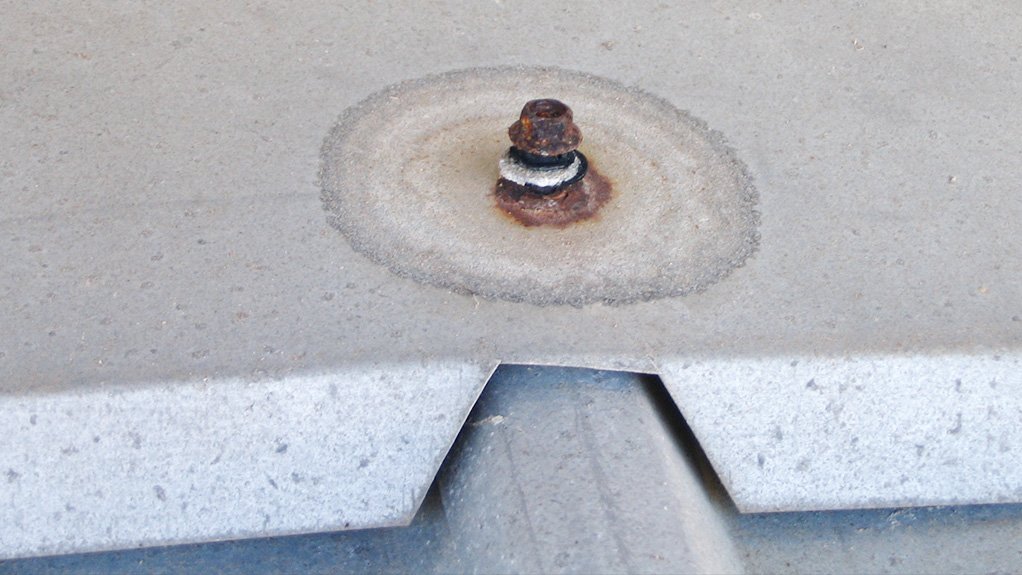 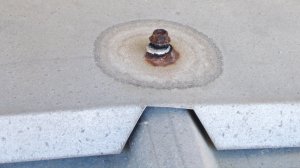 CORRODED FASTENER Fasteners and washers with inferior protective coatings may initially save money, but will ultimately create more maintenance costs

The main function of a cladding system is to weatherproof a building for its design working life or a period specified by the owner, says Southern African Metal Cladding and Roofing Association (Samcra) director Dennis White.

However, as environments differ, it is imperative that the protective coating for cladding is matched to the particular environment in which it is located, he notes.

“With coated metal cladding, the steel core of the material and geometry of the cladding system provide the structural strength while the coating provides the durability. A cladding system comprises the profiled cladding together with the fastening method used to attach it to the supporting structure,” he explains. White adds that all buildings constructed within the jurisdiction of local authorities in South Africa have to comply with the National Building Regulations and Building Materials Act.

He says Sans 10400 ensures compliance with the National Building Regulations. Sans 10400 Part-L requires a design working life for cladding of not less than ten years. This has been increased to 15 years in an update soon to be published.

In addition, any roof covering and waterproofing system, or part thereof, should be able to resist the effects of ultraviolet radiation without the deterioration of its essential properties, the effects of condensation at the undersurface, as well as an attack from common atmospheric gases and saline atmospheres in marine environments.

The minimum thickness of protective coatings to steel-based cladding is limited to two broad environmental conditions, namely coastal areas (defined as an area within 5 km from the coastline) and areas subjected to aggressive environments.

“Unfortunately, this is a classic case of one size not fitting all. There are many coastal areas where salt-laden air is carried further than 5 km inland, such as across the Cape Flats and up the West Coast,” says White.

He adds that “aggressive environments” is a rather nebulous description, as such environments are not always apparent, as in the case of a rural town with a high incidence of sulphur dioxide from burning fossil fuels, or the wind-borne fallout from tall chimney stacks that can see contaminants carried long distances from industrial plants.

There are other invisible contaminants, such as humidity and the period of wetness of the coating, which can have a major impact on the performance of coatings, both metallic and painted.

Meanwhile, White says corrosion during the dry months on the highveld is greater than during the wet months. Pollutants accumulate on the surfaces during the day and are converted into a corrosive poultice when mixed with dew.

“It must be remembered that not all coatings react in the same way to a corrosive agent. For example, aluminum is more resilient than zinc to chlorides but less so to highly alkaline substances,” explains White. Micro conditions can also be considerably more aggressive than those of the surrounding environment, as is the case with animal husbandry. Fallout from extraction fans, ducts and louvres, together with runoff from air-conditioning units, can also have detrimental effects.

Further, neighbouring processes and activities such as foundries and galvanising plants can also dramatically increase the corrosion of a coating. Unwashed areas, such as the underside of canopies, cladding covered by items of plant or ducts and side cladding covered by overhanging eaves, are vulnerable, says White.

Meanwhile, he says, most cladding, including roof and side cladding, is subject to high suction forces owing to wind action, which is why it is important that the fasteners, as well as the washers, are not only strong enough to resist these forces but that the durability of their protective coating is also at least equal to and preferably better than that of the cladding.

The same criteria apply equally to the weatherproof seal between the washer and cladding. Premature failure of the durability of any of these components will, at the very least, cause leaks, rapid deterioration and perforation of the cladding, as well as the cladding being blown off the structure.

Fasteners and washers with inferior protective coatings and weatherproof seals may initially save money, but will ultimately create more costs when it comes to maintenance. “[This] is why all fasteners must comply fully with Sans 1273,” concludes White.