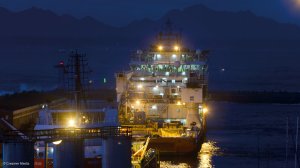 More than 90% of Africa’s trade is seaborne, with fishing contributing to food security for more than 200-million Africans, while vast oil and gas potential lies offshore.

“In a kind of sea blindness, much of Africa’s focus has for long between locked on land issues – on borders and resource conflicts ¬– leaving a void in the marine space that others were glad to fill,” says Walker.

“Globally, Africa is often seen as a blank space in terms of its maritime involvement. The continent needs to use its newfound peace and stability to build a sustainable blue economy, which is currently underdeveloped and threatened, partially because African states lack the ability to monitor and secure their waters.

“Africa’s seas should contribute to economic and environmental security, but are too often a story of stolen resources, drowning refugees and missed opportunities.”

Piracy remains a threat, while drug smuggling and illegal fishing are increasing.

Illegal, unregulated and unreported fishing is estimated to cost sub-Saharan Africa around $1-billion a year.

Thousands of tons of hazardous waste are dumped at sea, he adds.

Africa has more than 100 ports, many operating below capacity. African-owned ships account for less than 1.2% of the world’s shipping.

AIMS 2050
However, the continent has plans to change to develop its blue economy.

Africa’s Integrated Maritime Strategy 2050 (AIMS 2050), developed by the African Union (AU) and adopted in 2014, outlines ways to protect and grow the maritime industry.

It encompasses aspects such as fishing, oil and gas, security, piracy, pollution, biodiversity, transport and harbours.

The strategy, for example, calls for increased marine education and awareness, and the development of an African ship-building industry, he notes.

It also envisages the establishment of a pan-African fleet, as well as the expansion of port infrastructure.

However, all of these goals are much easier written than executed, warns Walker.

No single African country can secure its marine domain on its own, and without the collective political will to put AIMS 2050 in place, non-African countries will continue to profit from the continent’s rich marine resources, he warns.

“So, while the continent now has a strategy in AIMS 2050, it has little capacity to execute it.

“A maritime strategy requires you to think more internationally. It requires the development of legal mechanisms and, as marine borders are fluid and oil and fish resources transnational, regulations between countries must be harmonised.

“Executing this strategy also means you need a radar network and a presence on the water, either in the form of a navy or coast guard of some sort. Also, as not every country can afford such a presence, you require inter-country cooperation.

“Ultimately you need to be able to protect your trade routes, your resources and your fish stocks,” explains Walker.

To date West African and southern African states has adopted maritime strategies, while East Africa has a strategy under development.