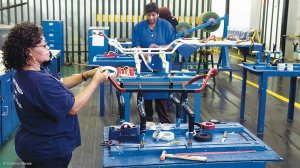 Trade and Industry Minister Dr Rob Davies has approved the newly revised Manufacturing Competitiveness Enhancement Programme (MCEP) guidelines for implementation from April 1 in a bid to ‘tighten up’ the potentially imbalanced awarding of manufacturing support grants.

This followed consultation with various stakeholders last year, which the Department of Trade and Industry (DTI) said had “necessitated the amendments” of the current MCEP guidelines.

During these engagements, the DTI said it discovered that the highest percentage grant benefit of 61% was being awarded to larger enterprises while only 39% of the grant went to small and medium-sized enterprises.

“After this, it was decided that some ‘tightening measures’ were required so that the MCEP can support as many entities as possible,” the DTI said in a statement.

“This is a significant reduction from the previous benefit available under this component,” commented Cova Advisory MD Duane Newman.

In addition, the definition of qualifying costs for skills development had been narrowed and now excluded training-related costs for marketing, financial, human resources and information technology-related training costs.

Furthermore, clarification had been provided with respect to registration requirements, bonus grants and the inclusion of manufacturers in the private-sector defence industry.

Entities manufacturing tobacco products would not be eligible for the MCEP incentive, while entities in which a development finance institution had a majority shareholding would only be supported on a case-by-case basis and only if an exit strategy was provided, Newman pointed out.

He said a specific provision had also been inserted to ensure that activities or assets that had benefitted under other DTI programmes would not qualify for the MCEP.

Over and above these amendments, the broad-based black economic-empowerment (BBBEE) requirement of the MCEP had been amended to align with BBBEE policy to ensure that applicants met this requirement within a period of three years since the launch of the MCEP.

Prior to their revision, the MCEP guidelines had been reviewed in July 2012 following various consultations, which resulted in the relaxation of minimum requirements on capital investments and provided a clearer definition of total assets.

Further comments and inputs were received and a third version of the guidelines was published in November 2012.

The MCEP had been implemented by the DTI since June 4, 2012, and, as at March 31, 524 applications were approved with over R4-billion committed to support manufacturers and sustain over 100 000 jobs.