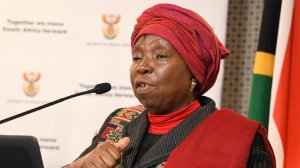 Cooperative Governance and Traditional Affairs Minister Nkosazana Dlamini-Zuma says government is taking every possible measure that it can to help curb the spread of Covid-19, which has called for some controversial regulation changes and restrictions since the start of the lockdown in South Africa.

At the start of Level 3 lockdown on June 1, government had eased many restrictions for economic activity, including lifting a ban on the sale of alcohol, which was subsequently reinstated by President Cyril Ramaphosa on July 12.

Dlamini-Zuma says the number of Covid-19 infections have risen sharply since many of the Level 4 restrictions were lifted and, therefore, government has to balance saving lives and saving livelihoods.

“We have reintroduced the prohibition on the sale, transportation and dispensing of alcohol, because the risks associated with alcohol are far too high and we must limit the pressures on our healthcare system.

“When there was an absolute prohibition on the sale of alcohol, the overall number of visits to trauma units in South Africa dropped from 42 700 to about 15 000 visits.

"Following the lifting of the prohibition on the sale, transportation and dispensing of liquor in Level 3, health facilities have seen a substantial rise in alcohol-related trauma injuries and death, resulting in added strain on the capacity of health facilities,” Dlamini-Zuma explains.

Health Minister Zweli Mkhize says 30% of people older than 15 years consume alcohol in South Africa, or have consumed alcohol in the last year. South Africans drink, on average, five to six drinks per person per day, which is much higher than the global average.

He adds that almost six out of ten drinkers older than 15 years of age binge drink, which means they have periods where a large number of drinks are consumed in one sitting.

Modelling done by government has determined that an alcohol sales ban could result in at least a 20% reduction in all trauma admissions – and up to 40% reduction in overall alcohol-related trauma by the third week.

He adds that many public health workers have cited pressure in hospitals owing to the admission of trauma patients, breaking the routine in the hospitals' management of other patients, "making for a disruption which we can not afford to happen during a time when a virus is rapidly spreading".

She comments that people let their guard down too easily when they consume alcohol.

She adds that when people consume too much alcohol and become intoxicated, they often indulge in irresponsible behaviour, including violence at home or in public, or driving recklessly and causing car accidents.

“These [victims or culprits] then become an emergency when they are admitted to hospital, taking away space, equipment and staff from those infected with Covid-19 or other illnesses. Intensive care units and hospital beds get full and [this] reduces access for [persons with] Covid-19 infections.”

Dlamini-Zuma highlights that government does not want to limit people’s rights, but rather limit the spread of the virus and instances where it is likely – it is for this reason that the curfew was reinstated by Ramaphosa on July 12, to limit the movement of people as far as possible, as well as the continued ban of inter-provincial travel, except for work purposes.

Further, Ramaphosa also announced that it is now mandatory to wear a mask in public, including when using public transport or going into any public building or shop.

Dlamini-Zuma says it is the collective responsibility of society to ensure everyone wears a mask when in public spaces or around groups of people, as well as to ensure that physical distancing is adhered to at all times.

“We do not want to see more people getting infected or dying, we should at least contribute to saving their lives where we can.”

She mentions that gatherings with family are not allowed because by its very nature, when you arrive among family and friends, the instinct is to come near them, while the intergenerational nature between families also bring about risk.

“Younger people [who have gone to work or] shopping may spread the virus to an elderly family member.”

Minister in the Presidency Jackson Mthembu adds that there has been dissatisfaction from the public around “discrepancies” in the regulations around family gatherings and other public gatherings, to which he comments that it is hard to monitor adherence to safety protocols behind closed doors between families, while it is easier to monitor in the case of some public gatherings that have been allowed.

Additionally, it is often during family gatherings at old age homes, for example, when elderly people are at risk of contracting the virus from younger family members.

Hotels, lodges and any other kinds of accommodation are not allowed for leisure, only for isolation purposes or for work trips, Dlamini-Zuma confirms.

On the matter of tobacco still being banned, the Minister says she is not at liberty to comment on the matter, since litigation is under way.

“We are number ten globally in the number of confirmed Covid-19 cases, we need to take every measure to really protect our nation,” she concludes.