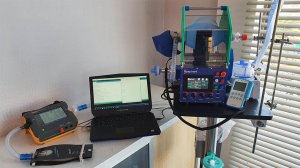 While South Africa faces significant job losses amid the Covid-19 outbreak, engineering company Dale Automation expects to create 50 to 60 additional jobs should it receive the necessary medical approvals to proceed with the manufacturing of its prototype emergency ventilator.

“We are working with several people to try speed up the process and hope to have some positive information soon. It’s very frustrating being chased in circles,” says Dale operations director Adam Sweeting.

The device is not aimed at replacing ventilators but providing emergency ventilation as and when required, he highlights.

An eight-person team was involved in the development of the unit called ‘Respirare’, which is a joint effort between Dale’s engineering department and medical professionals.

“Without their dedication, effort and guidance, we would not have achieved our vision in such a short period. We look forward to the future of the project and hope that one day our idea will be able to save someone’s life.”

The idea was to build a simple, yet cost-effective machine designed for Africa’s challenges and the urgent demand of ventilators required to treat Covid-19, notes Sweeting.

Focused on assisting with the Covid-19 pandemic locally, Dale is part of the national ventilator project and has other potential local customers. Sweeting has also been in talks with a company in Botswana.

While many high-tech ventilators use turbines or compressors for air delivery and high-end components, Dale opted for an Ambu-bag setup which is readily available and low cost. Its design combines continuous positive airway pressure and mechanical ventilation in one machine.

As many modern ventilator safety features, such as the monitoring of positive end-expiratory pressure, as possible where then included in the company’s design.

“With continuous electricity supply being one, the unit is configured for solar integration and includes standard battery backup power. It can be used anywhere it is needed.”

With Dale’s system being low voltage, it can be used in emergency vehicles, such as ambulances. Its dedicated battery backup allows for its use in remote locations with problematic power sources, while the base model can be fitted with a solar charger.

“The unit is designed to last at least 12 hours on battery power; however, tests are being conducted with higher performing batteries to increase this capacity. The design also allows for quick access to the Ambu-bag to establish manual ventilation of a patient should it be required,” highlights Sweeting.

The unit was designed to incorporate a humidifier device which can be included as an optional extra. The central processor can also be equipped with a 3G breakout board to send alarms notifications by SMS or to an integrated monitoring system should multiple patients need to be monitored.

“As an engineering firm active in the poultry and baking industries, we knew nothing about ventilators, lungs and Covid-19. Therefore, we had to develop the entire project from scratch. We studied many of the open concept designs and looked at advantages and disadvantages of each device. We then took our own ideas and built our first prototype.”

Many of the local businesses Dale contacted were unable to help and the company was forced to turn to international suppliers.

For some components, the company stripped old electrical appliances it had lying around as well as other research and development projects it was busy with. This allowed it to configure a basic mock-up of exactly what was needed, with staff assigned to procure various outstanding components from international sources.

Although local vendors of these imported components have since been identified, this experience has highlighted the opportunity to manufacture these components locally, with the Respirare prototype comprising only 40% local content.

Logistics was another challenge faced by Dale, as not many cargo flights were scheduled for South Africa, resulting in many parcels being held up in Dubai for several days.

“Once the goods arrived, the reduced staff complement at the couriers created further delays. It was frustrating knowing that the parts had arrived, but not being able to gain access to them,” explains Sweeting.

The company is targeting a production capacity of 100 units a month; however, should the project gain momentum, various improvements in design and manufacturing would allow this target to be exceeded.

The system will be manufactured and assembled at Dale’s factory in Cosmo City, Johannesburg.

“The electronics are assembled separately and integrated during the final assembly stage. The mechanical build of the system is basic,” notes Sweeting.

Should Dale’s prototype gain more momentum and support, the idea will be to invest in various in-house injection moulded tooling to reduce the number of hours of machining and production costs and subsequently increase production output.