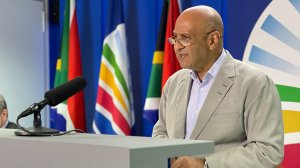 Democratic Alliance (DA) Shadow Minister of Public Enterprises Ghaleb Cachalia on Thursday called for a State of Disaster to be declared on power utility Eskom following a heavy run of load-shedding this year.

The DA has also written to Presidency Director-General Phindile Baleni requesting a State of Disaster on Eskom and asking for the electricity sector to be placed on the agenda of the next Cabinet meeting.

The DA also wants an update on its request at the post-Cabinet briefing.

The party believes that the significance of a State of Disaster on Eskom and the electricity sector will help galvanise the national effort towards incremental energy projects with specific deliverables.

Cachalia said load-shedding is job-shedding and he called for an immediate response to the crisis.

“The failure to resolve load-shedding’s longstanding existential threat to the country’s economy and its competitiveness, has robbed unemployed South Africans of much needed jobs and damaged the country’s standing as an investment destination,” he stressed.

The DA went on to blame the ANC government and energy regulatory bodies for adopting a ‘business as usual’ approach and ignoring the lack of urgency on the electricity crisis.

“We need radical measures to avert disaster which is why we are calling for a State of Disaster,” Cachalia said.

He blamed government for not removing the red tape that is preventing new renewable energy projects.

The DA says more than 30 projects in the mining industry for self-generation, valued at more than R60-billion, were being delayed by red tape.

The DA wants an Electricity Emergency Response Plan in place to lay out short, medium- and long-term goals to bring additional generation capacity to the national energy grid.

Conceptualisation and finalisation of the plan should involve all stakeholders from government, industry experts, engineering bodies, Independent Power Producers (IPPs), civil society and members of the public.

“Contrary to what the Minister of Public Enterprises Pravin Gordhan appeared to insinuate recently, South Africa does not need to reach stage 8 of load-shedding before an emergency can be declared. The truth is, South Africa is already in an electricity shortage crisis, with a generation shortfall of between 4 000MW and 6 000MW right now, and the government is duty bound to respond with urgency,” said Cachalia.

He warned that should the electricity crisis be allowed to degenerate beyond its current stage, the consequences on the country’s economy, security, investment climate and socio-economic order will be severe.

DA Shadow Minister of Mineral Resources and Energy Kevin Mileham said the underlying premise for the call for a State of Disaster is that South Africa should be making it easy for IPP’s to bring new generation capacity online, at scale and in the shortest possible time.