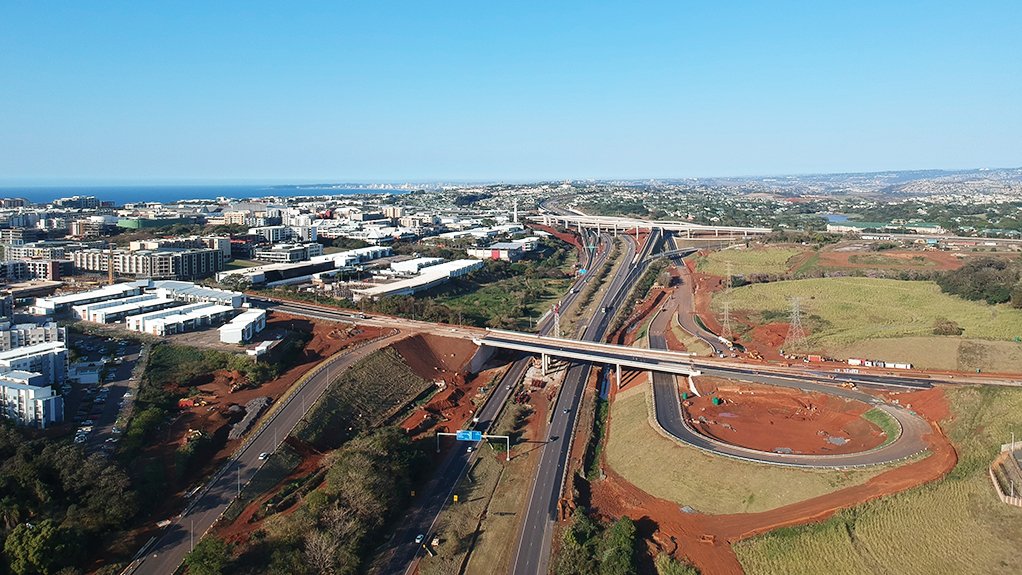 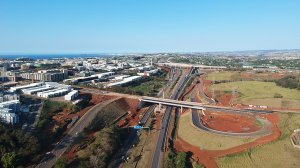 The new Cornubia bridge that crosses over the N2 to uMhlanga, in KwaZulu-Natal, has been partially opened to traffic, says construction design and engineering services provider Royal HaskoningDHV project engineer Brian Downie.

The bridge is a key component of eThekwini’s GO ! Durban integrated rapid public transport network (IRPTN). The GO ! Durban IRPTN is a service delivery project that will run through the Cornubia Interchange. It entails bus rapid transit to ensure that most of the city’s people are no more than 500 m from public transport.

With the bridge structure being 125 m long and 50 m wide, Downie notes that it represents a significant engineering feat, as Royal HaskoningDHV decided to construct the bridge as three bridges side by side and ‘stitch’ them together after the last concrete was poured. It forms one structure, carrying six mixed-use traffic lanes, as well as pedestrian sidewalks and two bus lanes.

Further, the contractor created the 1.2 m x 6 m voids in the slab using polystyrene rather than conventional shuttering. “This was the first time this had been done across a national road and it was extremely successful – saving the contractor time and lowering the risk of honeycombing in critical areas around the prestressing,” he highlights.

A total of 165 people were employed at the peak of the project.

Moreover, last month Downie was inaugurated as president of the South African Institution of Civil Engineering and he notes that the institution’s theme for next year, It’s a New World, acknowledges that important changes are underway at an accelerating rate.

These changes will impact on South Africa and the country has ten years, at most, to get ahead of the challenges of education, entrepreneurship, empowerment and employment, he adds. Creative thinking and the resources of the engineering professions can assist the country in standing firm in an increasingly competitive world, says Downie.

“During my career, the change in the life of a civil engineer was astonishing, but unforeseen. Now that we know that accelerating change is coming, we need to plan for it and we need to rethink the traditional processes to pre-empt that change,” he concludes.