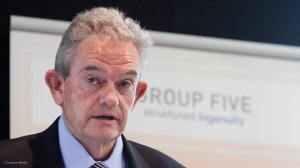 The construction industry’s engagement with the Competition Commission and the rest of South Africa remained a work in progress, said Group Five CEO Mike Upton on Monday as he reported the construction group’s financial results for the year ended June 30.

The commission earlier this year levied R1.46-billion in penalties against 15 companies in the industry for collusive tendering related to projects concluded between 2006 and 2011.

Upton said the fines already issued were an “immediate remedy”, adding that all matters relating to the investigation into collusion had not yet been settled.

Group Five, as a whistleblower on collusive practives, was granted leniency by the commission on all 25 of its submissions. However, despite its cooperation over a period of four years, Group Five earlier this year received notice from the commission that it wanted to fine the group for infringements on four projects in which it had been implicated and for which no leniency was granted.

Upton said the group had no evidence of such collusive involvement, and “could not accede to the penalties, and chose not to settle hastily”.

However, Group Five was currently “positively engaged” with the commission on the matter, and had already raised a financial provision, “in case of a penalty”.

Upton added that the risk of civil claims against the industry did exist, and that the situation was “continually monitored”. He believed the public sector, for example, might be “looking at its options”. However, Group Five had no information on the existence of any such civil claims.

“We’ll have to see what happens next.”

“GREAT ANGER”
The construction industry had reached a place where “all the cards were on the table now”, said Upton. What remained of importance was how the industry reacted to the collusion scandal.

He said there was “great anger, of course”, especially from black business, which felt they might have been marginalised during a time – prior to the 2010 Soccer World Cup – when government had vastly increased its infrastructure spend.

He said SA Inc, as a whole, was also “certainly not happy” with the construction industry.

Upton said Group Five believed the industry and government should engage each other in the months ahead in order to mend fences.

It was also possible for the industry, for example, to set up a fund to develop new emerging black contractors, or to contribute to a number of community projects.

“There are a lot of opportunities here,” said Upton. “We need to reset the base. The industry is in a bad place and it is up the industry to fix it.”

He added that Group Five’s business with government had not suffered a setback as a result of the Competition Commission investigation.