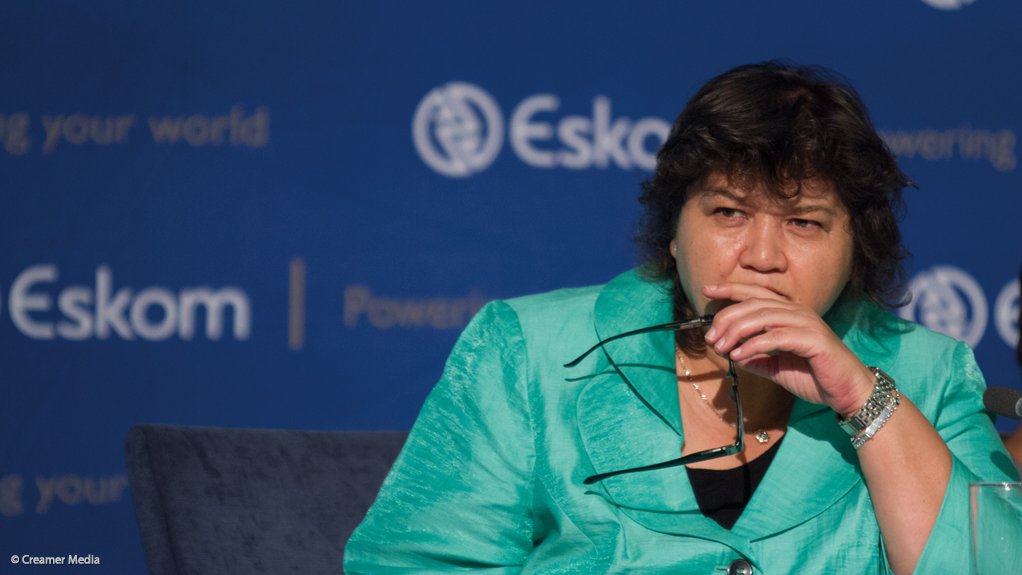 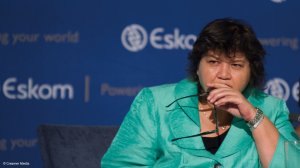 Public Enterprises Minister Lynne Brown is urging households and businesses to make provision for “at least two-hour power outages between 7:00 and 22:00 daily”, while warning that the energy situation will remain “extremely tight” for the foreseeable future.

Brown made her appeal in an opinion piece distributed on Wednesday, barely an hour ahead of a second Eskom ‘Power Alert’ for the day, in which it announced that it would transition from stage 1 to stage 2 load shedding between 14:00 and 22:00. In a previous alert it announced that stage 1 load shedding would be introduced from 10:00.

During stage 1 load shedding, the system operator removes the equivalent of 1 000 MW of demand from the grid by switching off, on a rotational basis, direct Eskom customers, while calling on municipal distributors to do likewise in line with published schedules. At stage 2, the load reduction rises to 2 000 MW, while between 3 000 MW and 4 000 MW is shed during a stage 3 emergency.

Even at stage 3, Eskom says that 86% of demand will be met and it also insists that it will only resort to rotational power cuts as a last resort measure to ensure a total blackout is avoided. Under a blackout scenario, or an uncontrolled tripping of the system, Eskom calculates that it could take weeks to restore supply.

The most recent round of interruptions had arisen as a result of “unplanned maintenance” at the Majuba Unit 3, Duvha’s Unit 2, and Koeberg’s Unit 1. In addition, the Kriel Unit 3 was experiencing a boiler tube leak, while Camden Unit 4 had a generator hydrogen leak.

These unscheduled interruptions were taking place amid ongoing planned summer maintenance of around 5 000 MW a day, which CEO Tshediso Matona said was being pursued “religiously” so as to restore the stability of the existing fleet, whose performance had deteriorated materially since 2010.

Brown said work was under way to reduce maintenance backlogs and improve the performance of power plants and reduce unplanned outages, which she described as a “major concern”.

Government, she said, was also supporting the national grid through the more frequent use of diesel powered open-cycle gas turbines (OCGTs) to help bridge the immediate gap between supply and demand.

But no mention was made of the R3-billion in immediate funding being sought by the utility to enable it to continue with its purchases of diesel for the remainder of its financial year to March 31, 2015. Business Day reported earlier that the National Energy Regulator of South Africa had given Eskom permission to generate more than the 450 GWh-a-month sanctioned for OCGT use in the third multiyear price determination.

Brown said there were also plans in place to restore 960 MW of generation capacity at Majuba by the end of the year, following the coal-silo collapse of November 1, 2014, which precipitated the latest series of power cuts, with Eskom resorting to load shedding several times in November, December, January and now February.

“These immediate interventions are receiving our highest priority through the War Room established by Cabinet to fast-track the implementation of a five-point plan to turn the current situation around,” she wrote.

Some 1 000 MW of new IPP supply would come on stream within 18 months, while a programme would be launched to “harness” 800 MW of waste energy from the sugar and paper industries.

While apologising for the “inconvenience caused”, Brown reiterated President Jacob Zuma’s argument that the “legacy of apartheid” was among “a number of complex factors” that led to the current crunch.

“Over the last 20 years, electricity has been provided to more than 5.8-million households, reducing the percentage of households without electricity from about 50% in 1994 to 14%,” Brown wrote, noting that prior to democracy millions of marginalised black South Africans had been deliberately excluded from the national grid.