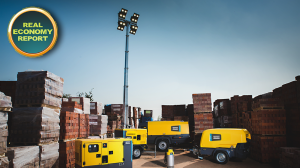 Atlas Copco South Africa last month hosted a tour at their head office in Boksburg to covey the company’s new corporate brand message – “The Home of Industrial Ideas” – which is one of the many ways Atlas Copco has tweaked its company to move into the Fourth Industrial Revolution. Marleny Arnoldi attended the tour.

Atlas Copco in 2014 moved into a multipurpose facility in Jet Park, in anticipation of catering to an expanding industrial equipment market. However, the economy and various industries had seen slow growth and the company needed to improvise in optimising the use of the space at their head office. Atlas Copco SA MD Frans van Niekerk gives us background.

Atlas Copco now shares the property with Rand Air and Epiroc. The facility comprises a 6 100 m2 office administration building, a 9 600 m2 distribution centre and warehouse, 7 600 m2 of workshops and 1 100 m2 in training facilities, known as the academy.

There are 23 workshops on the premises, mainly used for repairs, maintenance and rebuilds.

A highlight at the facility is Atlas Copco SA’s torque equipment calibration laboratory. This lab is the only one in the country that is accredited to do hydraulic calibrations up to 45 000 Newton meters. The lab is also able to work up to pressures of 75 000 Nm for calibration of wind turbines.

The training academy at Atlas Copco uses virtual reality in training new recruits, preparing them for the precision that is necessary to use tools on assembly lines. The training is especially helpful for the automotive industry, since as many as 680 vehicles are assembled a day, with thousands of bolts that need to be accurately tightened. Van Niekerk explains how the facility is set out.

In aligning to market conditions and general movements in the industry, Atlas Copco is moving away from fossil-fuel-driven equipment towards electricity-driven equipment, with its compressors, generators and light towers. Van Niekerk discusses the company’s increased move to electricity.