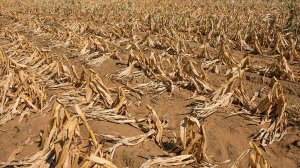 Agricultural Business Chamber discusses the state of the agricultural economy in South Africa. Camerawork and editing: Darlene Creamer.
Photo by Bloomberg
CAPE DROUGHT It has been predicted that the Western Cape drought will cause job losses of 30 000 and monetary losses of R5.9-billion in the agriculture industry
TECHNOLOGY South African farmers are at the forefront of global technical advancements in their industry

Despite policy uncertainty and drought having impacted on the South African agriculture industry, Agricultural Business Chamber (Agbiz) agricultural economist Wandile Sihlobo says the industry outlook is fairly optimistic in the near term.

Sihlobo met with Engineering News to discuss the state of the South African agricultural economy in the lead up to this year’s Nampo Harvest Day exhibition. Sihlobo, who hopes to attend the exhibition and join in several of the exhibition’s feature discussions as a panellist, says the industry has grown significantly since a wave of droughts in 2015.

“We are doing fairly well at the moment. Especially when comparing with 2015 and 2016, a period during which the industry contracted significantly, owing to drought in the summer crop growing regions of the country.”

He states that the sector began to recover and showed increased growth towards the end of 2016, with year-on-year growth of 17.7% in 2017.

The strength of the industry was particularly visible through the country’s 2017 agricultural exports, which exceeded $10-billion for the first time in the country’s history, he explains.

“These export levels show that the industry has not only recovered from the preceeding droughts but also boomed since the initial 2015 industry contraction.”

Sihlobo says some of the contributing factors to the current industry upturn include increased rainfall in previously drought-stricken areas, an increase in the planting of cash crops, higher crop yields and an increase in productivity, all of which point to farmers in South Africa “becoming better at what they do”.

He says despite changing climates and harsh conditions, South African farmers are among the most skilled globally.

“The stakeholders . . . taking part in the South African agricultural market . . . are the same who take part in the Western countries. The practices and technologies applied in South Africa are on par with major agricultural countries globally. From this we can safely say that our farmers are at the forefront of global agricultural advancements.”

He adds that, with local industry embracing the latest in farming technology, the country currently enjoys the highest level of food security on the continent.

Despite a positive industry outlook, Sihlobo says Agbiz has predicted double- digit production declines in the farming regions of South Africa’s Western Cape, owing to the sustained drought in that region.

“The well-publicised water shortages in the Western Cape have had a notable impact on the production of wheat, table grapes, wine grapes and palm fruits,” Sihlobo points out. He reiterates that this does not bode well for the area’s agricultural sector, stating that recent reports from the Western Cape government and the Bureau for Food and Agricultural Policy suggest that job losses will amount to about 30 000 in the industry and monetary losses are predicted to amount to R5.9-billion, owing to the loss of productivity and profitability caused by the drought.

To boost outputs and overall farm productivity in the industry, farmers need to continually stay abreast of the latest technologies and industry trends, says Sihlobo.

He states that the Nampo exhibition is an opportunity for farmers to gather, network and avail themselves of the latest technologies and trends. He expects that new technologies and investment opportunities aimed at boosting productivity will be at the forefront of this year’s exhibition.

Further, he also expects several dialogues to take place regarding pivotal industry topics. “Policy discussion will take centre stage in this year’s exhibition . . . although we are also likely to hear discussions on technology, climate change and land policies that currently are the most central issues. . .”

Sihlobo says Nampo is a positive ecosystem for the agriculture industry through which the industry can connect and progress collectively.

The rate at which policies are made in South Africa often creates uncertainty that can impact negatively on farm planning, says Agricultural Business Chamber (Agbiz) agricultural economist Wandile Sihlobo.

“The debates around the contentious issue of land reform, particularly expropriation without compensation, remains a key risk that could potentially undermine investment in the sector if not handled well.”

He notes that the impact has been well documented on the Agbiz Industrial Development Corporation Agribusiness Confidence Index – the tool used to gauge the health of and investor confidence in the agricultural sector.

“After the 2015 drought, the index improved. In June last year, the index started softening again and the key reason for that was not as a result of a slow-down in agricultural outputs, but because of land policy pronouncements, particularly the issue of expropriation without compensation,” Sihlobo highlights.

He notes that, while the concept of land expropriation without compensation has not been adopted by the country yet, it has nevertheless been met with negative reaction from the farming community.

He says Agbiz has spent a lot of time on the issue of land reform, and believes that there are other methods that could sustainably effect land reform in South Africa, without adopting the expropriation without compensation route.

Agbiz has expressed a desire to implement a functional and beneficial land reform policy that benefits the people of South Africa as well as its agricultural economy.

Agbiz is currently refining a new land reform model, which aims to encourage land reform without having to alter the Constitution. Its model looks to promote collaboration from the private sector and government in line with the spirit of the National Development Plan.

“If land reform is going to be successful and not disrupt the South African economy, it will require the buy-in of all industry-related sectors,” he concludes.