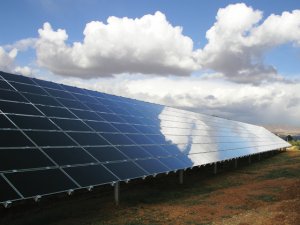 Nasdaq-listed solar photovoltaic (PV) group First Solar on Tuesday said that it was engaging with several sub-Saharan African governments around the benefits of installing utility-scale PV systems to diversify their energy mix and accelerate energy security.

While it is mainly targeting South African utility Eskom, First Solar regional director for sub-Saharan Africa Johan Cilliers said it was also focusing on a number of countries in East and West Africa.

“Africa is quickly catching up to the rest of the world in terms of renewable energy,” he commented at a media briefing in Johannesburg.

The implementation of renewable-energy feed-in tariffs in some countries and the establishment of supportive regulations indicated the evolution of institutional attitudes towards diversified energy sources, Cilliers said.

The company was currently advancing a pilot pre-paid solar PV project in Kenya, which it hoped would demonstrate the feasibility of a prepaid energy user system in isolated areas without access to the national grid.

However, First Solar’s primary focus remained on developing utility-scale PV systems, or those with a production capacity of over 650 MW, which ensured economies of scale and reduced upfront development costs.

“We can generate energy at a levelised cost of electricity in sunnier regions of the world that is competitive with prices for energy delivered at peak times and from diesel generator sets,” he said.

“Additionally, our PV systems – which are long-life assets, extending 25 years and beyond – represent long-term economic viability as operations and maintenance costs are relatively low and hold virtually no risk attributed to commodity pricing over their life span.”

If the externalities associated with fossil fuel generation, such as health and environmental impacts, are taken into account, Strevel believed that diversifying an energy mix through long-term PV-based generation strategies also yielded considerable economic benefits beyond the system cost.

The company stated that its PV modules ultimately produced more electricity in real-world conditions and delivered a higher energy yield than traditional crystalline silicon PV technologies, owing to the low temperature coefficient of its modular technology.

“PV has routinely proven to be the most effective technology at scaling to meet growing energy demand. It can be added to the grid quickly as portions of a PV power plant are completed, and can be built modularly to expand capacity as needed,” said Strevel.

The company said that solar PV energy generation alone would not solve the increasing energy needs of sub-Saharan Africa, but that its inclusion in a diversified energy mix was vital.

“While many will say that we should only focus on solar-generated power, it will be the combination of several technologies that ensure energy security,” commented Cilliers.

First Solar constructed the world’s largest operational solar PV power station – the 290 MW Agua Caliente project, in Arizona, in the US – and has two 550 MW solar PV power plants currently under construction elsewhere in the world.